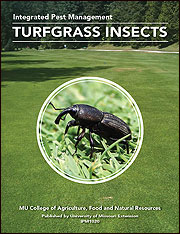 Although insects are one of the most populous forms of animal life on earth, only a small number of them may, at some time, become a potential problem in turfgrass. Turfgrass insects can be somewhat cyclical and very dependent on a number of factors. Weather, suitable food sources, desirable habitat and predators all play a part in the population size of particular insect species.

Turfgrass damage is usually not observed until the numbers of an insect species reach a threshold level. For example, a homeowner does not need to treat a lawn with pesticides if only one or two white grubs are found while doing yardwork. However, if the homeowner peels back dead sod and finds more than five annual white grubs per square foot, treatment would be needed. Turfgrass-damaging insects may be present in a stand, but to warrant action, they need to be in a large enough population to cause decline.

Turfgrass pests cannot be controlled over long periods of time solely through the use of pesticides. To have healthy and vigorous turfgrass, it may be necessary to use pesticides in combination with sound cultural practices. A properly designed integrated pest management (IPM) system not only will maintain control of existing pests, but also will help prevent the recurrence of these pests and the possibility of new pest outbreaks.

Plan for potential pest problem before planting. Keep records of past problems at your site(s), and discuss pest problems with neighbors or colleagues.

Integrated pest management (IPM), the idea of integrating turf management cultural practices into a control program for turfgrass pests, is a concept that has been around for years. Efforts to start an IPM program begin with a discussion of basic plant health care.

More-detailed discussions about turfgrass species/cultivars, mowing, watering, fertility, aeration and thatch control are all part of this newer concept to put more emphasis on plant health care (PHC). Consider what can you do to develop the healthiest plant possible to combat or defend against weeds, diseases or insects.

IPM and PHC both still recognize the need for insecticides when all else fails. There are times when insect levels are just too great for even a healthy lawn to overcome. Turfgrass managers adopting IPM or PHC practices will have a better understanding of the environmental conditions that weeds, diseases and insects prefer.

When pest problems prevail, consider whether the turfgrass manager had done all that was culturally possible, and what changes might need to be made in the management program. Crucial decisions early in the development of a pest management program can make a significant difference in the direction a program takes.

Integrated pest managment is a systematic approach to solving pest problems through cultural practices, with insecticide application being a legitimate tactic when all else fails. University of Arizona photo

If possible, select a species, cultivar or blend/mixture of turf that is best suited for the environmental conditions in which it will be grown. Turfgrasses adapted to Missouri's transitional climate are better able to withstand stress. Keep in mind, though, that no single turfgrass species will grow well here year-round.

However, several opportunities exist to select turfgrass species that offer insect resistance. Insects often prefer feeding on one turfgrass species over another, so selection of a species that is not a preferred food source for a prevalent insect pest will reduce potential for damage. Selection of endophyte-enhanced turfgrasses may also produce a healthy turfgrass stand with a  reduced need for pesticide use. Endophytes are fungi (Neotyphodium spp.) that live within turfgrass plants. Endophyte-enhanced turfgrasses — perennial ryegrasses and tall fescues — resist insect damage by producing toxins called alkaloids. These alkaloids are not harmful to plants but deter insects that feed on them.

Turfgrasses are placed under constant stress when they are mowed lower than their proper height. Scalping reduces plant vigor and reduces overall root growth, making the plant more susceptible to other environmental stresses and pests.

Keep turfgrasses mowed at the recommended height for the species, never remove more than one-third of the leaf blade at one time, and always keep mower blades sharp. Cool-season turfgrasses should be maintained at 3 inches or higher, whereas warm-season grasses may be maintained at 1 to 2 inches. Proper mowing practices will make a lawn more tolerant of insect damage.

Irrigation may be a vital part in the development of a healthy lawn; however, watering could have some drawbacks when insects are involved. Beetles of many root-feeding insects prefer moist soil to lay eggs. Egg-laying females seek out moist soils to lay eggs because the survival of their larvae, which are white grubs, is dependent on moisture.

Allowing turfgrasses to dry out slightly during the peak flight period, from late May to early June, may help to reduce the potential for white grub damage in late July to early August.

Soil aeration can greatly improve the quality of turfgrasses. Aeration reduces soil compaction and allows air, water and nutrients to more readily enter the turfgrass root zone. Sustaining a quality root-zone environment increases the quality of shoots and leaf tissue several times over. When done at the proper times of the year, aeration will also make for more efficient use of irrigation and fertilizer applications.

The two most prevalent types of aeration are solid tine and hollow tine. Solid tine aerators simply punch into the soil profile. Hollow tine aerators physically remove plugs of soil, a process called core aeration. Soil removed by core aeration may be added into the thatch layer, thus increasing the population of soil microbes present to break down organic matter and thatch. Thatch reduction will discourage some insects from inhabiting the turfgrass stand.

Thatch is the layer of partly decayed plant material (i.e., stems and roots) and organic matter between the growing turf and the soil. Excessive thatch acts as a sponge for water and nutrients, making them unavailable to the plant. Thatch also acts as a perfect habitat for insects to lay eggs, develop and populate a turfgrass stand.

Thatch can be controlled in several ways: 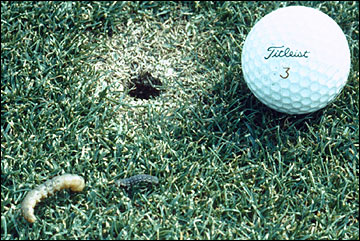 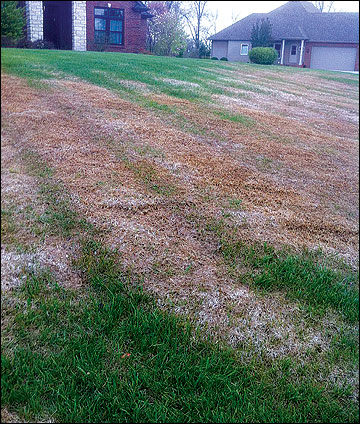 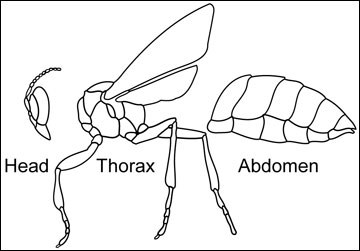 All adult insects have two physical characteristics in common. They have three pairs of jointed legs and three body regions: a head, thorax and abdomen. 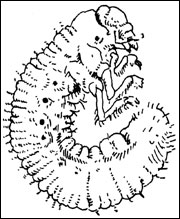 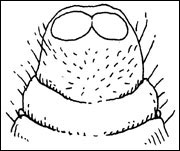 The head has antennae, eyes and mouthparts. Antennae vary in size and shape and can be helpful in identifying some pest insects. Antennae are movable and contain sensory receptors that are used to detect odors, tastes, vibrations and other stimuli. Insects have compound eyes composed of many facets, each with its own lens. Compound eyes enable insects to detect motion but probably do not produce clear images.

Most insects also have one to three simple eyes, or ocelli, located on the upper part of the forehead. These simple eyes do not see images, but they are sensitive to changes in light intensity that may trigger a reaction of flight or running.

The four general types of insect mouthparts are chewing, piercing-sucking, sponging and siphoning. Chewing mouthparts contain toothed jaws that bite and tear. Beetles, caterpillars (larvae of Lepidoptera, including armyworms, cutworms and sod webworm) and grasshoppers are in this group.

The thorax contains the three pairs of legs and, if present, the wings. The various sizes, shapes and textures of wings help identify insect species. The forewings take many forms. In beetles, they are hard and shell-like; in grasshoppers, they are leathery.

The abdomen is usually composed of 11 segments, but eight or fewer segments may be visible. Along each side of most of the segments are openings called spiracles, through which oxygen enters and carbon dioxide exits the internal respiratory system.

Note
When using any insecticide, read and follow directions on the label accompanying that product. Reference to specific trade names in this publication does not imply endorsement by the University of Missouri; discrimination is not intended against similar products not mentioned.