The main reason for fertilizing trees and shrubs in the landscape is to maintain reasonable vigor so that plants will be able to resist environmental stresses and pests. Trees and shrubs in a landscape may require little or no supplemental fertilization if plants are sited correctly, fallen leaves are shredded in place, nutrient-containing mulch is used or surrounding turf areas are fertilized. Fertilization is not a panacea. Don't expect it to solve problems associated with careless planting, improper watering or poor drainage. Be certain that new trees and shrubs are suited to the climate and location.

Often landscape trees are planted into soils with low fertility. When possible, conduct a soil test to determine whether the soil at the planting site is deficient in phosphorus or potassium. Because these nutrients do not move through the soil very well when they are surface applied, amending the soil to recommended levels at planting time may promote establishment of the tree. Avoid fertilizing newly planted trees with a high rate of nitrogen fertilizer. This may stimulate excessive leaf growth at the expense of root growth, leaving the new tree susceptible to drought stress. Usually a light surface application of nitrogen fertilizer one month after planting will promote establishment.

In most landscape situations, leaves are raked from beneath shade trees to facilitate the growth of turf. Removal of leaves eliminates the recycling of nutrients that occurs in the natural habitats of tree species used in the landscape. Fertilization may be necessary to compensate for nutrients "mined" from the tree root zone by leaf removal.

Check tree growth by measuring down from the tip of the twig to the first ring of bud scale scars; this is the current season's growth. The previous year's growth extends between the first and second bud scale scars (Figure 1).

Determine general tree vigor by checking the growth of several twigs during the past three or four years. Twig growth on most young trees should be 9 to 12 inches or more per year (Figure 2). Large, mature trees may grow only 4 to 6 inches per year.

Figure 1
Gauge a tree's growth in the current year by the distance between the tip of a twig and the first bud scale scar. 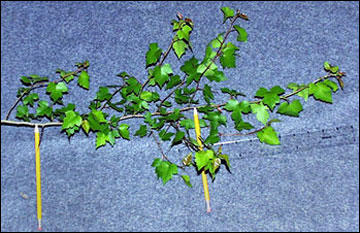 Figure 2
Twig growth on a young tree should be 9 to 12 inches per year. The space between the first two bud scale scars (indicated here by the pencils) is last year's growth.

If fertilizer is required, it can be applied any time from late September through early April. Often, best results are obtained when fertilization is done after the first hard freeze in October, but before the soil freezes in December. During this period, the soil temperature is still warm enough for roots to take up minerals, which are then stored for growth the following spring. Fertilizer applied during winter may be lost to leaching or runoff. The second-best time to fertilize is in March or April, just before new growth begins. Fertilizing after mid-July may stimulate late growth that can be damaged by an early freeze.

Fertilizers can be classified as organic or inorganic. Organic materials are derived from plant or animal sources. Nitrogen in organic materials, such as compost, sewage sludge or blood meal, is released slowly by microbial conversion from the organic (NH2) to the ammonium (NH4) or nitrate (NO3) forms that can be taken up by plant roots. Nitrogen in inorganic fertilizers is generally released quickly because NH4 and NO3 are present in a soluble form. Slow-release inorganic fertilizers such as ureaformaldehyde (UF), isobutylidene diurea (IBDU) and sulfur coated urea (SCU) are commonly used in turf fertilizers. Various plastic- or resin-coated slow-release materials are also available. While slow-release fertilizers cost more than conventional materials, they save labor by allowing larger amounts to be applied at one time without risk of burning turf or roots of ornamentals or stimulating excessive growth.

Tree and shrub growth is limited more often by a deficiency of nitrogen than by a lack of any other element. As a result, trees usually respond best to fertilizer with a 2-1-1 or a 3-1-1 ratio (nitrogen-phosphorus-potassium). Commonly available fertilizers with a 2-1-1 or similar ratio are 18-6-12, 12-6-6, 10-6-4, 10-8-6 and 10-8-4. If the desired ratio is not readily available, add about 12 ounces of ammonium nitrate (33-0-0) to each pound of fertilizer such as 12-12-12 to make a 3-1-1 ratio fertilizer. If soil test results indicate that phosphorus (P) and potassium (K) are not deficient (more than 50 pounds P and 150 pounds K per acre), it is best to use a fertilizer containing only nitrogen. Continued fertilization with P and K regardless of soil levels may lead to nutrient imbalances.

Turf fertilizers usually work well for trees because they contain the desired ratio of nitrogen, phosphorus and potassium, and some of the nitrogen is in a form that is slowly released to the roots. However, never fertilize trees with fertilizer materials containing broadleaf weed killers such as 2,4-D or dicamba.

Fertilize shade trees throughout the area occupied by the root system. This usually includes the soil up 1.5 to 2 times the diameter of the branch spread. In most landscape situations, 95 percent of a tree's roots are found within 18 inches of the surface. Fertilizer applied to turf surrounding a tree will often supply most of the minerals required to keep the tree healthy. If leaves are raked, it is advisable to place fertilizer or compost containing phosphorus and potassium 12 to 14 inches deep every few years to compensate for nutrient mining and to get the fertilizer below the turf roots. When possible, chop leaves in place with a mulching mower, allowing the particles to filter down into the turf where the minerals they contain can be recycled.

In general, large evergreen trees can be treated the same as deciduous trees with respect to fertilizing. Evergreens normally have roots that extend beyond the branch spread.

Compost incorporated before planting, used as mulch around trees and shrubs or applied to turf as a top-dressing can supply the nutrients required to keep trees and shrubs growing well. Since compost often contains 0.5 to 1.0 percent nitrogen, 100 pounds of compost may supply 1 pound of actual nitrogen, much of which is slowly available. Most composts are also good sources of calcium, P, K and micronutrients. In addition to supplying plant nutrients, top-dressing or amending with compost also adds organic matter to the soil, thereby improving soil structure, water infiltration and microbial activity. Bark mulches supply some calcium and potassium but are low in nitrogen and phosphorus.

How much fertilizer material?

Ideally, soil test results should be used to determine fertilization rates, especially for phosphorus, potassium and micronutrients. However, if test results are not available, fertilizing with a 2-1-1 or 3-1-1 material at a rate supplying 2 to 4 pounds of actual nitrogen (N) per 1,000 square feet per year should promote good plant vigor. If more than 2 pounds of quickly available N (from a source such as ammonium nitrate) is applied, it should be split into two applications, perhaps in April and October. Certain plants such as broadleaf evergreens, dwarf conifers and alpine plants should receive about half the rate of most deciduous plants. Excessive fertilization of pines often creates large gaps between branch whorls. 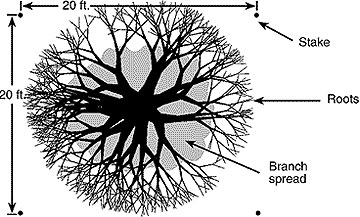 Figure 3
Surface application of fertilizer around a tree. Stake off an area that includes most of the root zone, which extends 4 to 6 feet beyond the branch spread of the tree. Here an application to 400 square feet is needed.

Surface application
In general, surface application of fertilizer is an efficient and effective way of getting nutrients to tree and shrub roots. In many cases, fertilization of turf supplies enough nutrients to meet the needs of trees in the area. Nitrogen from surface-applied granular fertilizer moves readily into the root zone of woody ornamentals. The amount of fertilizer to apply should be based on the area of tree or shrub root zone to be fertilized (Figure 3). Measure out a rectangular area covering most of the root zone (extending 4 to 6 feet beyond the branch spread) and calculate the area in square feet by multiplying length by width. For example, if the area to be fertilized is 20 feet square and you wish to apply 2 pounds of nitrogen per 1,000 square feet, you would calculate the amount of nitrogen to apply as follows:

Using an 18-6-12 fertilizer, the amount of fertilizer needed would be:

This amount of fertilizer would also supply 0.3 pound of P2O5 and 0.5 pound of K2O whether or not they are needed.

Figure 4
Hole method for fertilizer placement around a tree. Place fertilizer in 6- to 12-inch-deep holes about 2 feet apart in concentric circles around the tree trunk and extending about 6 feet beyond the branch spread of the tree.

Hole method
If leaves are raked, it is advisable to place fertilizer, compost or other materials containing phosphorus and potassium into holes in the soil in the root zones of ornamentals every few years to compensate for mineral mining and to place the fertilizer below the turf roots. The holes should be at least 1-inch-diameter, 6 to 12 inches deep and spaced about 2 feet apart. Holes can be made with a punch bar or with a soil auger and heavy-duty drill. Use a drill with a reverse switch to allow the auger to be backed out of the ground if a root is hit. Also, flag the locations of water and gas lines before drilling. Holes should be made on about 2-foot centers, starting 2 to 3 feet from the trunk and extending about 6 feet beyond the branch spread (Figure 4). It is much easier to make holes in moist soil than in dry soil. However, if the soil is saturated, the sides of the holes will be "glazed," making them less effective for air diffusion and nutrient dispersal.

The amount of fertilizer to apply is calculated in the same way as for the surface application method but, in this case, it is evenly divided among the holes. Compost or coarse sand can be placed in the holes in addition to the fertilizer, or compost can be used alone in a technique called vertical mulching.

Another method for placing fertilizer below the roots of turf is injection of liquid fertilizer with a pressurized "soil needle." Injections are generally made 2 to 3 feet apart. This approach can be used for soluble fertilizers or for suspensions of slow-release materials.