Nitrogen in the Environment: Nitrogen Cycle

Nitrogen is important to all life. Nitrogen in the atmosphere or in the soil can go through many complex chemical and biological changes, be combined into living and non-living material, and return back to the soil or air in a continuing cycle. This is called the nitrogen cycle. 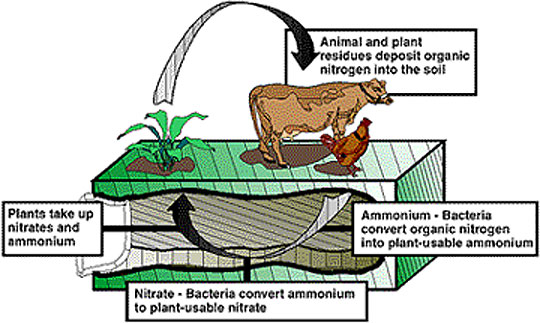 A basic look at the nitrogen cycle

Another way nitrogen enters the cycle is as inorganic nitrogen from the atmosphere and factories. The concern with these forms is that the incremental amount of nitrates they add to the nitrogen cycle may threaten groundwater.

Ways nitrogen is lost to the cycle

For the most part, the nitrogen cycle is soil based. Nitrogen is lost from the cycle in four ways:

Together, these first two processes account for most of the nitrogen lost to the cycle — a concern for soil fertility.

More about the nitrogen cycle

The largest single source of nitrogen is the atmosphere. It is made up of 78 percent of this colorless, odorless, nontoxic gas. However, plants are unable to use nitrogen as it exists in the atmosphere. Nitrogen from the air (N2) enters the nitrogen cycle through several unique types of microorganisms that can convert N2 gas to inorganic forms usable by plants. Some of these microorganisms live in the soil, while others live in nodules of roots of certain plants.

Nitrogen can be lost from the cycle. It can be lost to the atmosphere, removed by harvesting crops or lost to surface water or groundwater. However it is lost, nitrogen can enter the cycle again through one of the processes discussed above or through other processes. These additional pathways of gains and losses to the nitrogen cycle are illustrated in Figure 2. 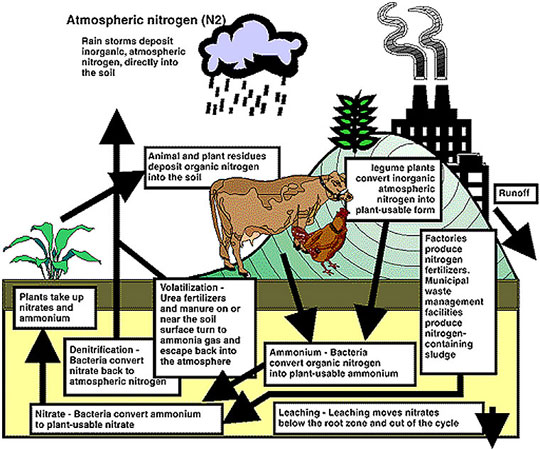 Figure 2
A more comprehensive look at the nitrogen cycle.

Nitrogen becomes a concern to water quality when nitrogen in the soil is converted to the nitrate (NO3-) form. It is a concern because nitrate is very mobile and easily moves with water in the soil. The concern of nitrates and water quality is generally directed at groundwater. However, nitrates can also enter surface waters such as ponds, streams and rivers. The presence of nitrates in the soil are largely the result of natural biological processes associated with the decomposition of plant residues and organic matter. Nitrates can also come from rainfall, animal manure and nitrogen fertilizers.

Once nitrates get into the groundwater, the greatest concerns are for infants less than one year old and for young or pregnant animals. High levels of nitrates can be toxic to newborns, causing anoxia, or internal suffocation. Seek alternative water sources if nitrate levels exceed the health standard of 10 ppm nitrate-N. Do not boil water to eliminate nitrates. It increases nitrate levels rather than decreasing them. The most common symptom of nitrate poisoning in babies is a bluish color to the skin, particularly around the baby's eyes and mouth. These symptoms of nitrate toxicity are commonly referred to as the "blue-baby" syndrome.