Land application is the primary means of using livestock wastes in Missouri. Properly spreading manure on cropland is an environmentally acceptable means of managing wastes and, at the same time, realizing a benefit from the manure's fertilizer value.

With the increased environmental concern and the need to closely match the fertilizer needs of the crop, farmers can no longer afford to just "spread manure." The land application operation should be given the same attention as spreading commercial fertilizer.

With knowledge of crop type, yield goal, soil tests and manure analysis, you can determine the needed rate of manure application. However, another critical step in obtaining this rate in the field is the correct spreader setting, operating speed and travel lane spacing.

Determining these factors is called "calibrating" the manure spreader. Calibrating a manure spreader requires measuring the weight of manure spread on a given ground area with a given travel speed, spreader setting, power take-off speed, lane spacing and other factors.

If the capacity of a manure spreader is known and the land area over which this amount of manure is spread is measured, then the application rate can be calculated by dividing the weight of manure spread by the area covered. It is important to understand the units of measurement used for manure application.

For calibration purposes, the capacity of a spreader in tons (for solid manure), or in gallons (for liquid manure) must be known. The volumetric capacity of spreaders is generally provided by the manufacturer. This capacity may be given as a typical "heaped" load condition or as a "struck" load condition. The struck load condition is the volume contained in the level-full box.

Caution should be exercised in using manufacturer's data for spreader volume. The standard used by most manufacturers in calculating spreader volume assumes a 60-degree angle of repose of the heaped load in the spreader. This may not be attainable with your particular type of manure or loading equipment.

A more accurate approach may be to calculate the volume from measurements of the appropriate dimensions of the spreader box and the height of a typical heaped load. Calculate rectangular box-type spreader capacities by multiplying length by width by height and adding the volume of the heaped portion to obtain total volume (Figure 1). 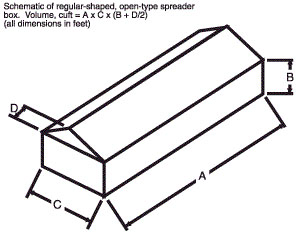 Figure 1
Three-dimensional view of a heaped-box spreader with dimensions and volume calculations.

Spreaders with irregular cross sections are somewhat more complicated. However, volume can be obtained rather easily by calculating volume segments separately and adding them together for the total (Figure 2). 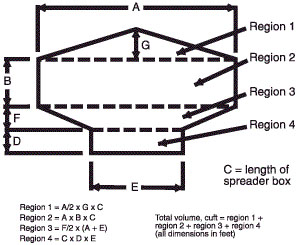 Figure 2
Three-dimensional view of a heaped-irregular shaped spreader with dimensions and volume calculations.

Closed-tank liquid manure spreaders generally have the shape of a cylindrical horizontal tank, and volume is expressed by the manufacturer in gallons. If manufacturer's data is not available, tank volume can be calculated as follows:

All solid and semisolid manure information is calculated on a per ton basis, which requires converting from volume measure to weight measure. In order to make this conversion, the bulk density (weight per cubic foot) of manure must be known, estimated or measured. Bulk density is largely dependent on moisture content of the manure. For example, a spreader load of poultry litter at 20 percent moisture content will be considerably heavier than the same spreader load at 10 percent moisture content. Yet, volume is approximately the same in both cases.

One way to determine bulk density is to weigh the loaded spreader, then divide this weight by the spreader volume. If access to scales is available, some percentage of the loads can be weighed — one or two of every 10 loads — and all loads assumed equal to the average of the weighed loads. However, scales are usually not available on-site, and another means of obtaining bulk density is needed.

An alternate method of obtaining bulk density involves weighing a known manure volume then using this information with volumetric spreader capacity to obtain spreader capacity in tons. A five-gallon bucket is usually available, has a volume of about two-thirds cubic feet, and is a convenient known volume to use for this measurement. The following steps outline the proper procedure for obtaining manure bulk density.

The average application rate in gallons or tons per acre can be calculated if the area over which one or more loads of manure has been spread is measured.

This method does not account for overlap or space missed between spreader paths and will only give a true picture of the application rate when the manure is uniformly distributed over the field.

Table 2 is a similar method of collecting data to measure application rate using Method A.

Once a spreader is calibrated, travel speed can be adjusted to give the desired application rate as illustrated in the following example.

Example
A farmer has determined by Method A that a spreader applies manure nitrogen at the rate of 170 pounds per acre for a given spreader setting and travel speed of 3.5 miles per hour. Soil tests recommend a nitrogen application rate of 120 pounds of nitrogen per acre. How should travel speed be adjusted to obtain the desired rate?

Anyone spreading manure can be more certain of the amount of fertilizer being applied if a calibrated spreader is used and the nutrient content of the manure is known. Such a practice ensures that manure is being managed in an environmentally sound manner and that maximum benefit from the fertilizer nutrients in the manure is being realized.