Although not yet detected here, thousand cankers disease (TCD) is a potentially fatal disease of black walnut, caused by the walnut twig beetle (Pityophthorus juglandis) and an associated fungus (Geosmithia morbida). TCD could easily spread to Missouri from the several eastern and western states where TCD is already present.

The good news is that the Missouri Departments of Conservation and Agriculture have been surveying the state for TCD since 2011, and to date we have no reported finds. The bad news is that TCD is difficult to detect. Surveys often detect TCD after the disease is well established. However, the earlier TCD is detected, the easier it is to slow the spread of the disease. Observant citizens can provide important assistance to survey efforts and have detected initial infestations of forest pests in other states.

Our native eastern black walnut (Juglans nigra) is an important species, providing many ecological and economic benefits. Black walnut is common in towns and cities across Missouri, and we have twice as many black walnut trees in our natural forests as any other state (see map below). But these trees could be threatened by thousand cankers disease. 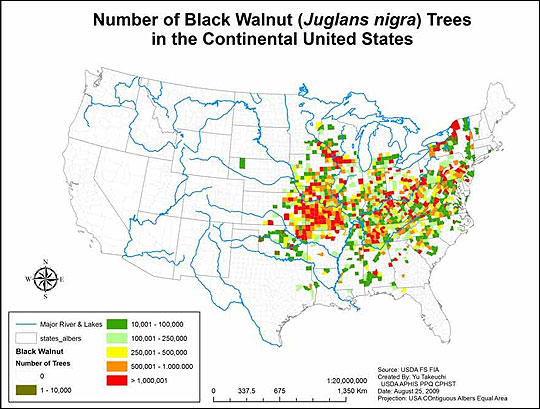