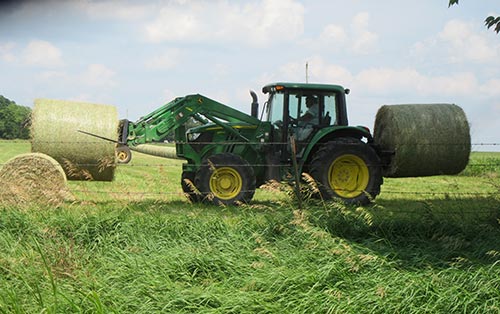 MOUNT VERNON, MO - The 2020 Ozark Empire Fair hay show attracted 40 entries made up of an interesting mixture of dry hay and haylages.  Even though farmers faced real challenges this year in finding a window of opportunity to harvest quality forage, the laboratory tests show it was possible for some to make amazing hay and haylage.

Leading the way with an outstanding alfalfa haylage entry that scored a relative forage quality (RFQ) of 276 was Groves View Dairy, Billings.  The alfalfa variety was WL 357, cut on April 19.  It scored 75.6% on total digestible nutrient (TDN) 0.79 on net energy lactation (NEL) with 19.7% crude protein.  The 276 RFQ was one of the highest we’ve had at OEF.

Groves View entered a second alfalfa haylage, same variety different field, that had an RFQ of 264.  Those two were the Champion and Reserve Champion in the haylage division of the show.  Other Class winners in the haylage division competition were Fire Sweep Ranch, Verona had a fescue with a RFQ of 107.  Jerry Staiger, Billings entered an alfalfa-orchardgrass third cutting that scored 195 and Moennig Dairy, Pierce City topped the annual grass competition with wheat haylage that scored 132 RFQ.

The competition in the dry hay division was equally stiff with the Champion coming from the legume class entered by Glenn and Toni Obermann, Monett.  The entry was a fourth cutting of alfalfa, Pioneer Low Lignin variety.  The RFQ was 221, TDN 68.19% and CP 23.2%.  Obermann’s have had the Champion hay in six of the last eleven years.

This was the 35th OEF hay show which is coordinated by University of Missouri Extension.  All hay samples are collected by Extension field specialists and analyzed through Custom Laboratory, Monett.  All entries must be raised in Missouri and harvested in 2020.

Placings are solely based on the RFQ numbers which include TDN and Neutral Detergent Fiber.  The latter helps estimate dry matter intake.  A 100 RFQ is designed to be equivalent to fully mature alfalfa.

Extension has prepared a booklet which gives details of all 40 test results as well as a historical review of the various classes of hay and averages dating back to 1985.  The booklets and the champion hay and haylage will be on display in the FFA building at the fair.  Contact your nearest Extension Center for a booklet or how to get a copy online.