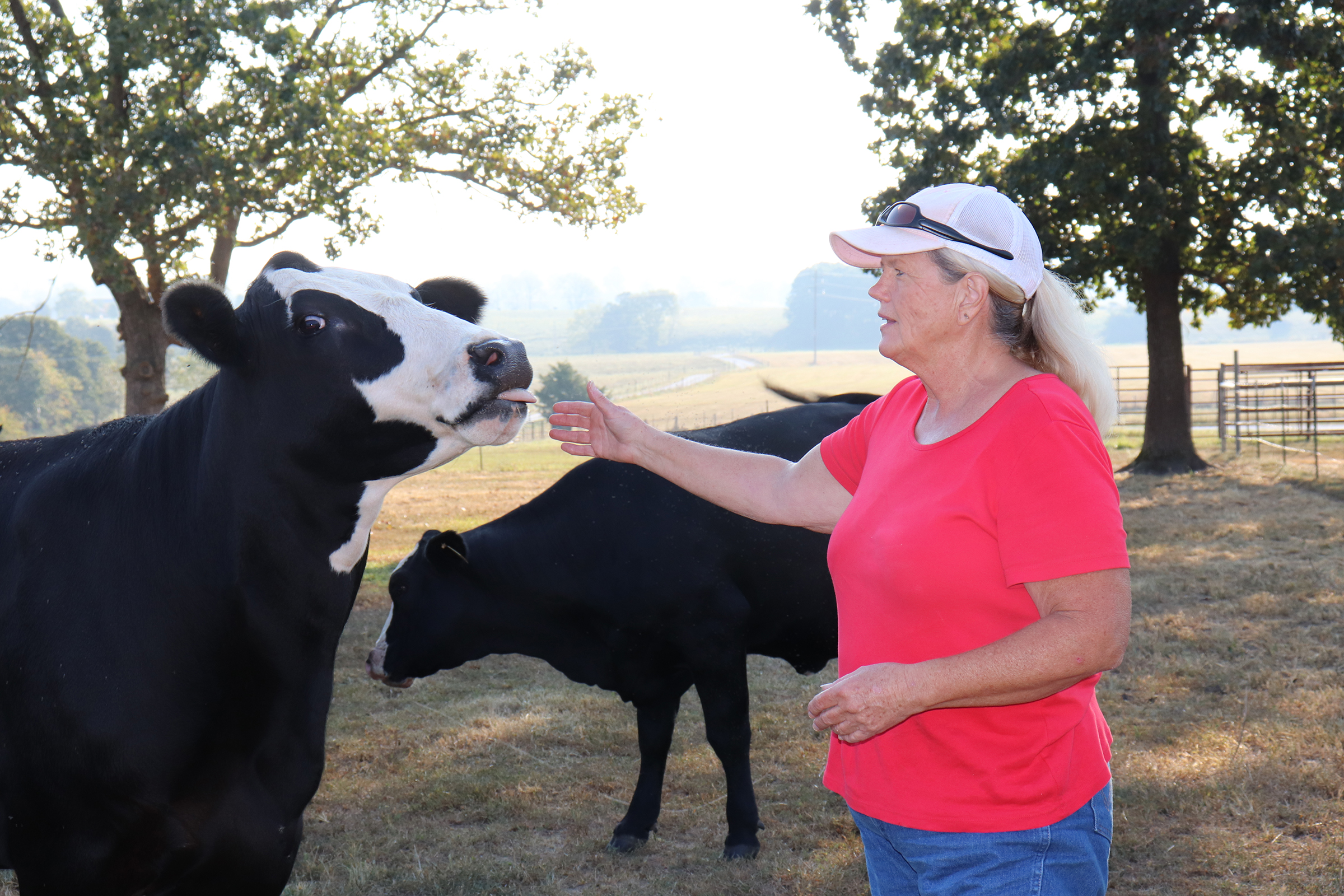 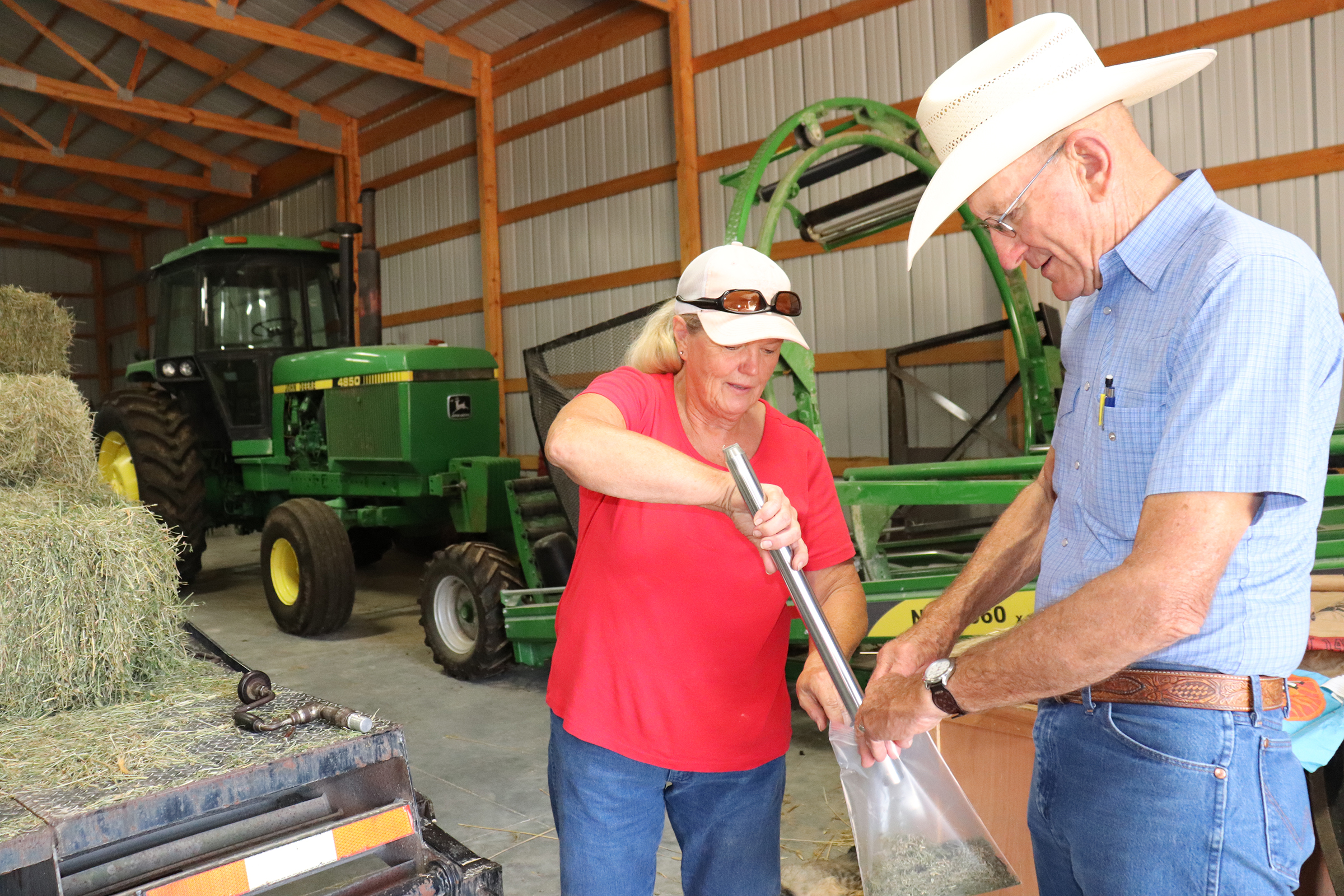 CRANE, Mo. – Like many girls raised on farms in the 1970s, Marcia Moreland learned to cook, clean and iron. Men and boys in the family tended to farm duties.

It was no different at school. FFA was for boys. FHA and home economics classes were for girls.

Today, Moreland owns and manages Moreland Farms in Barry County. She credits University of Missouri Extension specialists for teaching her the ins and outs of cattle and hay.

Moreland submitted her first entry at the Ozark Empire Fair Hay Show in 2012. She finished dead last. Disappointed and determined to learn how to grow quality hay, she asked MU Extension specialists for help. This year, she became the first woman champion at the show. She placed first in the dry hay class, with a relative forage quality of 207 on alfalfa cut April 19.

“I got my tail kicked that first year,” she says. “But I wanted to learn how to grow and make quality hay. I lost my dad 30 years ago, so I didn’t have that influence to guide me or learn from. So I had to find that knowledge elsewhere.”

MU Extension specialists in beef, dairy, agronomy and business—Eldon Cole, Reagan Bluel, Tim Schnakenberg and Wesley Tucker—helped her through classes, phone calls, farm visits and referrals. She also “looked over the fence” for advice from successful farmers and ranchers. She regularly looks at the MU Extension website for articles and publications that provide practical free help along with the findings of extensive studies by University of Missouri researchers.

Moreland planted 10 acres of conventional alfalfa in 2018. She recently put up her fifth cutting. She currently grows hay for her and her husband’s beef cow-calf operation, but she plans to provide small bales to a few customers in the future.

To improve her business skills, she took classes offered by Annie’s Project, an educational program for women farmers that is available in Missouri through MU Extension. “It was an eye-opener to the business side of farming,” she says. “I learned how to budget and plan from my FHA classes in high school, but farming enterprises were a bit different.”

Moreland and her husband run a commercial herd of black cows with a whiteface bull influence. They have worked diligently to have a gentle herd that responds to the call of “baaaaay-beeee.” “They are our employees,” she says. “They have to work in order to earn their bed and breakfast.”

When it’s time to wean the calves, they use “fence-line” weaning. This means mothers and calves spend several days in adjacent paddocks, separated only by a fence, before the calves are removed entirely. This makes the transition less stressful for the cattle and improves the health of the calf crop.

She moved the herd’s calving date to April 1, which lets her put cattle on fresh spring fescue when it is at its nutritional peak. She found that spring calves grow faster than calves born in January or February. It suited her operation and improved profitability of the cattle enterprise.

Moreland, known as “Mimi” by grandchildren and students, drives a school bus route. The break between morning and afternoon routes gives her time to manage more of the farm.

In addition to hay and cows, she raises sunflowers at the request of local florists. She grew cotton this year as an experiment and grows pumpkins for her grandchildren.

At 60, she has no plans of slowing down. She wants to buy more cattle and land for future generations of her family. She also wants to be an advocate for agriculture, teaching others what she learned through extension and life on the farm.

“I used to think being a farm kid was a bad connotation, but now I embrace being raised on a farm,” she says. “I know how blessed I am.”

https://extension2.missouri.edu/media/wysiwyg/Extensiondata/NewsAdmin/Photos/2019/moreland8760.jpg
Marcia Moreland and her husband run a commercial beef farm in southwestern Missouri. “They are our employees,” she says of the cattle. “They have to work in order to earn their bed and breakfast.” Photo by Linda Geist.

Marcia Moreland and her husband run a commercial beef farm in southwestern Missouri. “They are our employees,” she says of the cattle. “They have to work in order to earn their bed and breakfast.” Photo by Linda Geist.

Marcia Moreland and her husband run a commercial beef farm in southwestern Missouri. “They are our employees,” she says of the cattle. “They have to work in order to earn their bed and breakfast.” Photo by Linda Geist.