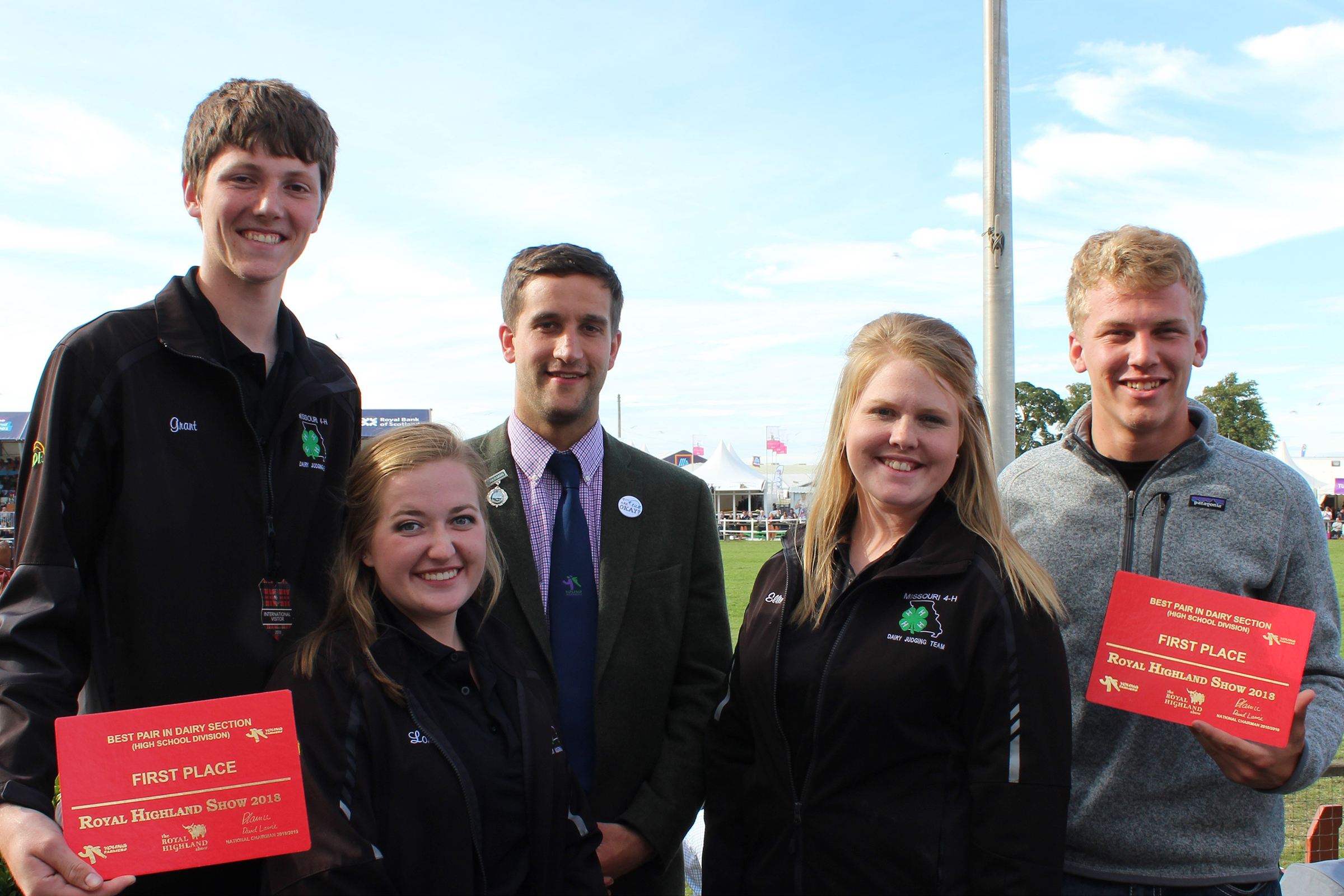 Missouri 4-H team members invited to compete during the June 20-July 2 tour were Grant Groves, son of Todd and Sheila Groves of Billings; Daryin Sharp, son of Erron and Delores Sharp of Bolivar; Ellie Wantland, daughter of Jeff and Leeann Wantland of Niangua; and Lora Wright, daughter of Larry and Jodi Wright of Verona. The tour visited Scotland, England, Belgium, Luxembourg and Germany.

Also invited to compete in the International Tour was the Monett FFA dairy judging team following its third-place finish in the National FFA Dairy Cattle Evaluation Contest at the National FFA Convention last October. Team members were Sam Masri, son of Fares and Lauren Masri of Monett; Lilly Schmidt, daughter of Loretta Schmidt of Monett; and Blake and Lora Wright, children of Larry and Jodi Wright of Verona.

In Scotland, the teams competed with other winning 4-H, FFA and intercollegiate teams on June 23 at the Royal Highland Show in Edinburgh. The pair of Grant Groves and Daryin Sharp placed first in the competition. Groves was the top individual and Blake Wright was second.

The second competition of the tour was at the National Holstein Show in Luxembourg. This contest was an individual event in which participants worked to see how closely they could match the official judge of the show. Contestants also selected the best udder in the class and wrote a set of reasons to justify their placing. First place in this contest was Blake Wright, followed by Lilly Schmidt in second place. Two team members, Ellie Wantland and Lora Wright, had the opportunity to participate in showmanship at the event.

In addition to the attending competitions, team members toured farms and historical and cultural sites. Most team members had the opportunity to stay with a Luxembourg family for three days. Tour stops included the World War II memorial just outside Luxembourg City where Gen. George S. Patton is buried.

“Our teams really embraced this opportunity to travel and have these new experiences,” Deaver said. “We are very proud of how they competed in the two judging competitions. Not only did they see agriculture and the dairy industry in another part of the world, but they developed lifelong friendships with members of the tour from other states.”

Supporters of the teams attended an appreciation dinner. Team members gave a presentation about their tour experience.