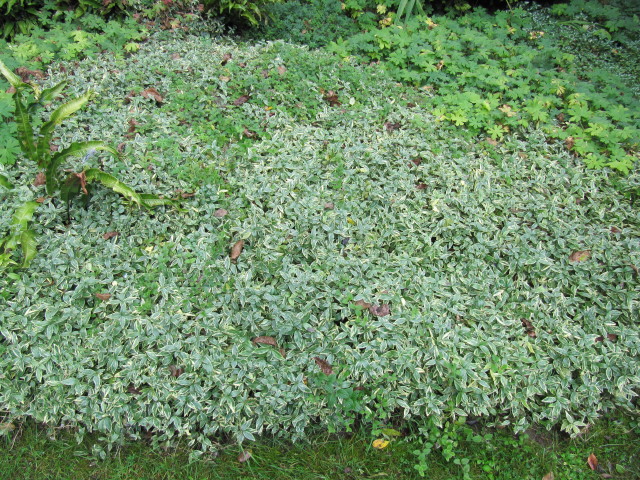 COLUMBIA, Mo. – Many landscapes have problem spots where nothing grows well or looks attractive, such as the area below a large tree with a dense leaf canopy.

The area beneath a tree receives relatively little light. This and the competitive root systems of many tree species create a problem for gardeners, said University of Missouri Extension horticulturist David Trinklein

Fortunately, plants called groundcovers thrive in these shady areas. Groundcovers curb soil erosion and serve as an attractive solution to the problem of too much shade. Spring is an excellent time of the year to plant groundcovers, said Trinklein.

Groundcovers are relatively low, dense-growing plants that need minimal maintenance. They establish a monoculture in the landscape. “In short, they simply outcompete neighboring plants for space,” Trinklein said.

Wintercreeper euonymus is an evergreen groundcover that, unfortunately, has become invasive. The popular wintercreeper cultivar “Coloratus,” however, rarely blooms and is much less of a threat to invade natural areas, Trinklein said.

Bishop’s goutweed, lily of the valley, mock strawberry, sweet violet, sweet woodruff and wild ginger are deciduous groundcovers that thrive in shady areas. Unlike their evergreen counterparts, during winter they leave the soil exposed and open to erosion.

Hostas and ferns represent additional shade-tolerant plants. However, their upright growth makes them better candidates for accent plants than for groundcovers.

Establish groundcovers in the same way you would perennials. Prepare the soil by incorporating organic matter for improved root growth and less stress on newly planted groundcovers. This, along with adequate water and fertility, helps them to establish themselves faster, said Trinklein.

Because there is little light for photosynthesis, most shade-tolerant plants do not grow very quickly. Gardeners can decide initial spacing based upon how fast they want ground cover. In most cases, plant on 6- to 8-inch centers for quick cover, he said. If you want to economize, space plants farther apart. Keep in mind that it takes longer to establish a dense stand.

Leaves accumulate under shade trees, especially large trees. Do not let leaves cover groundcover plants. This is especially critical for evergreen groundcovers in fall and winter. A thin cover in winter will not harm plants, but the cover should not be thick enough to totally block light.

Groundcovers tend to choke out competing weeds once established, but shade-tolerant weeds can cause problems while the groundcover establishes itself, Trinklein said. Add mulch between plants to suppress weeds. Remove weeds promptly to prevent them from slowing the development and reducing the general attractiveness of desirable groundcover.

Vinca, or periwinkle, is a popular, shade-tolerant groundcover plant.