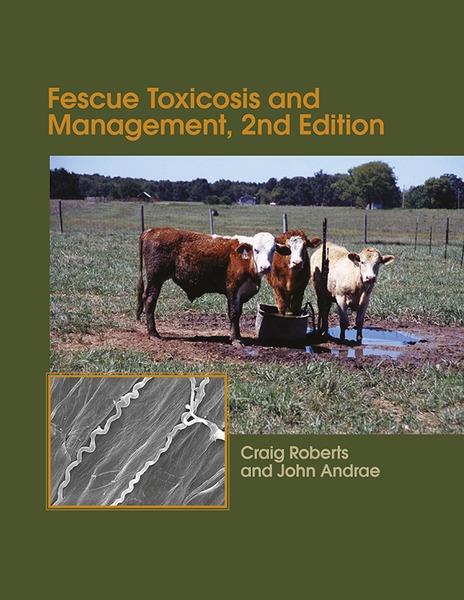 The 20 pages go beyond a guide sheet. It tells everything a farmer needs to manage tall fescue, Roberts says. All who enroll in multistate fescue schools in 2019 receive a free copy. It provides the agenda for the one-day schools.

Roberts, an MU forage specialist, joined with co-author John Andrae of Clemson University to re-do a publication they wrote in 2010. Much more is known now.

“We tell many ways to manage fescue toxicosis,” he adds. “But the best way to solve the problem is to kill old fescue then plant a novel variety.”

The widespread K-31 fescue grows an internal fungus that makes a toxin that protects the grass from droughts, pests and grazing livestock.

Researchers discovered other internal fungi, or endophytes, that protect fescue but do not poison grazing livestock.

Tall fescue fits in many farm grazing plans. Its toxicity allows it to survive largely unmanaged. The downside is severe losses, including fescue foot. Toxin restricts blood flow in animals, resulting in frozen feet. Those often cause loss of hooves and death.

The book cover photo shows three Missouri feeder calves on toxic fescue. Instead of grazing, one stands in a watering tank. The others stand in wet mud. All are cooling their heels.

The unshed winter coats, still worn in summer, are another sign of the toxicosis impact.

Cattle standing in ponds are not grazing or gaining weight.

Many studies cited tell of novel endophyte varieties that improve gains, reproduction and milking. Most losses are not visible, nor as dramatic as hoof loss.

Replacing fescue is long and complicated. But payoffs are large and lasting.

The report tells eight management strategies for toxicosis. Those range from dilution with clover to managed grazing or diet supplements.

All suggestions are based on research. Roberts doesn’t expect farmers to read all the literature cites, but citations increased to 73 from 47 in the first book.

The booklet comes from a prime source: The American Society of Agronomy.

As he described the new data, Roberts held one of the first copies off the press. He’ll have information later on how to get them. The best way will be to attend one of the fescue grazing schools starting in March. Those will be free with enrollment.

The Fescue Belt includes states from Missouri southeast to South Carolina and Georgia.

In March, the fescue schools will start in Missouri and travel on to six states across the Fescue Belt. Georgia has joined the network since last year. That was where fescue toxicosis was first described.

The organizing sponsor is the Alliance for Grassland Renewal. That brings together seed companies, testing labs, farmers, USDA agencies and universities.

All work together to tell the same story across the states, Roberts says. “The group came a long way in unifying grass management.” Livestock benefits. Farmers pocket profits.

For more, go to grasslandrenewal.org/education.htm.

Cover of the second edition of 'Fescue Toxicosis and Management.'

Cover of the second edition of 'Fescue Toxicosis and Management.'