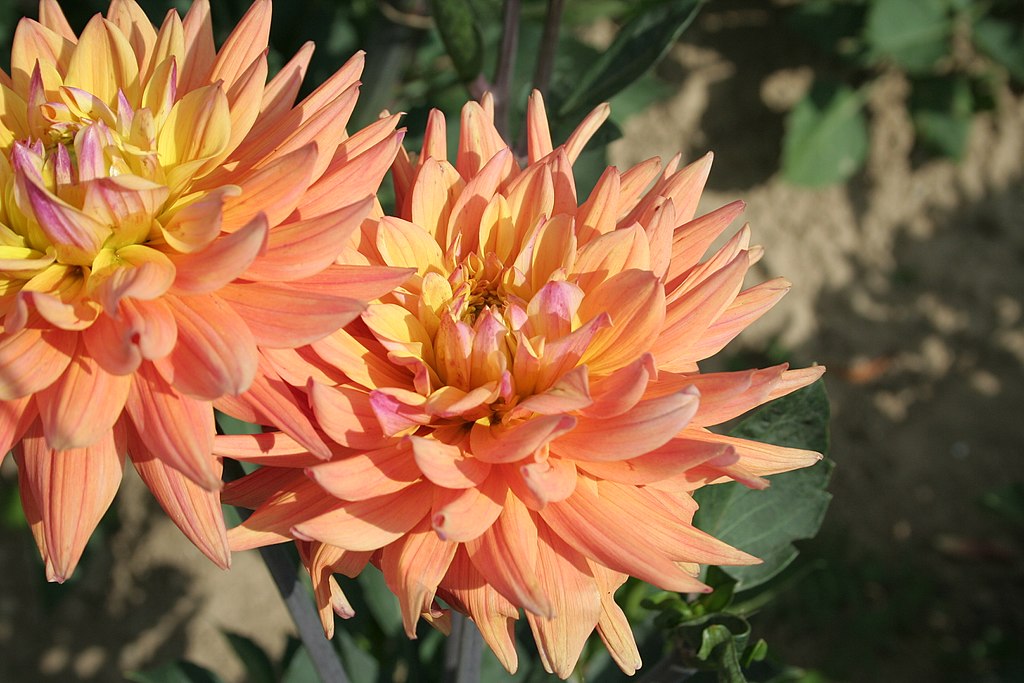 COLUMBIA, Mo. – Unlike many garden flowers that begin to lose their luster as summer fades into fall, dahlias are at their best in early autumn, said University of Missouri Extension horticulturist David Trinklein. The warm days and cool nights cause dahlias to bloom with intense, dazzling color.

This popular flower is most spectacular in September, said Trinklein. “Gardeners who do not already grow them should start planning now in order to enjoy dahlia’s impressive show of color next year,” he says.

A member of the aster plant family, dahlia is the national flower of Mexico, where Aztecs were growing it when Spanish conquistadors arrived in the 16th century. Early dahlias imported into Europe were of the single-flower type. As hybridization work began, the first fully double-flowered forms appeared, along with new color combinations. Over several centuries, dahlia developed into an ornamental plant with one of the largest arrays of flower forms, colors and sizes. To date, more than 50,000 cultivars have been named and registered.

Most people think of dahlia as the tall types propagated from tuberous roots. “The majority of named dahlia cultivars are of this type,” Trinklein said. “They are popular for the cutting garden or the backdrop of borders.” However, because of its tall stature and large flowers, this type of dahlia needs staking or additional support.

Dwarf dahlias propagated from seed have grown in popularity in recent years. These dahlias produce large numbers of small flowers on bushy plants and are cultured like bedding plants. This makes them ideal for annual beds or fronts of borders. Although these dahlias also form tuberous storage roots, most gardeners do not save them year to year because of the ready availability of inexpensive plants each spring, Trinklein said.

Plant dahlias where they will receive at least six to eight hours of direct sun and are protected from high winds. Plant tuberous roots of large types of dahlias about 14 days before the frost-free date for an area. Do not set out plants started indoors until the danger of frost passes. Dahlias cannot endure freezing temperatures.

Dahlias grow well in fertile, well-drained garden soils high in organic matter. If soil lacks organic matter, add up to 4 inches of well-rotted manure, compost or other forms before planting.

Prepare soil with a garden fertilizer high in phosphorus and potassium but low in nitrogen, such as 5-10-10. Incorporate about one-half cup in a 2-foot circle where each plant is to be located. Top dress with an equal amount of fertilizer in July. Dahlias grow quickly and need large amounts of water. Keep soil moist but not wet.

Dahlias benefit from pruning. The amount of pruning depends upon the flower’s intended use. Prune exhibition-type flowers to one main stem. Pinch plants for lavish garden display after first growth in the spring reaches a height of about a foot. A second pinch after emerging shoots achieve a length of 1 foot delays flowering but makes for a more spectacular display late in the growing season.

If saving dahlia’s tuberous roots from year to year, some viral diseases such as dahlia mosaic can occur. Sanitation, insect control and selection of tolerant cultivars control these.

Dahlias do not tolerate frost at this latitude. Dig roots and store each fall after the tops have died back. After digging, gently wash off remaining soil and allow roots to dry. However, do not dry them in direct sunlight. Next, separate the tuberous roots by cutting them from the main stem. Allow the portion of the stem attached to the part containing the “eyes” to remain. Dust cut ends with a fungicide to discourage storage diseases.

You may also leave the entire root system intact and separate the next growing season. Pack the roots in moist peat moss, sawdust or other inert organic material and place in a wooden or cardboard box. Ideal temperature for storing roots is 40-45 F.

Find more information about dahlias and their care on the American Dahlia Society website at www.dahlia.org.