Paddlefish snagging at Lake of the Ozarks. 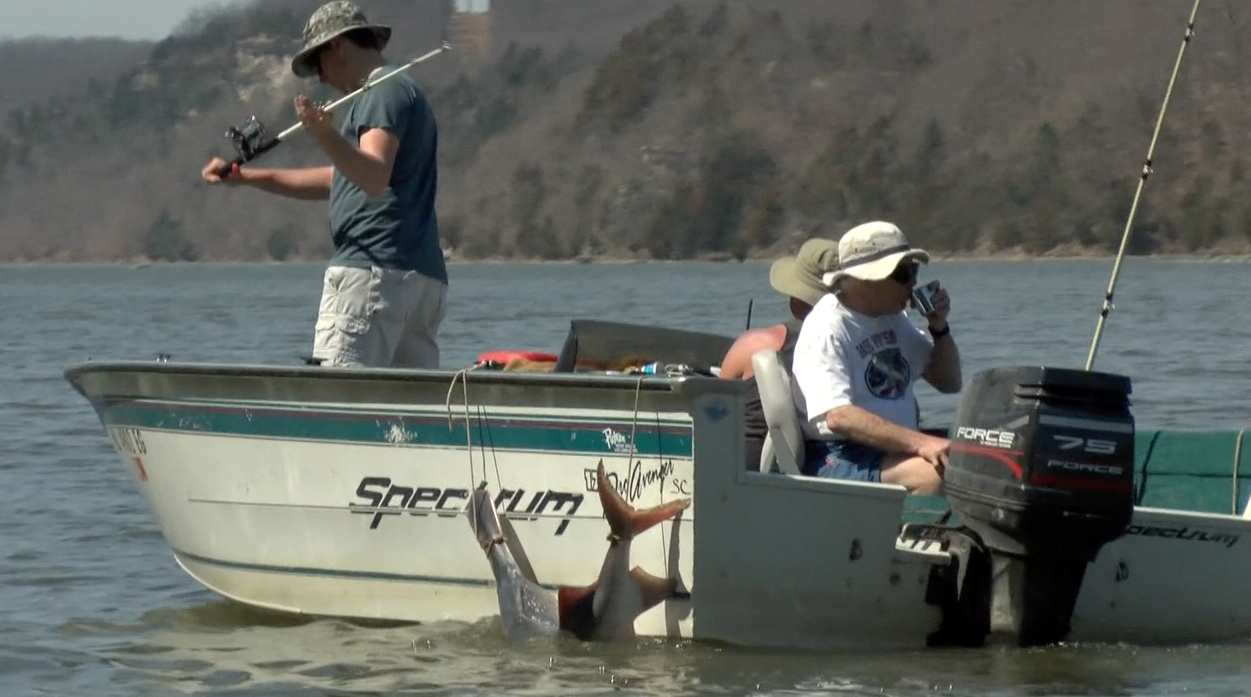 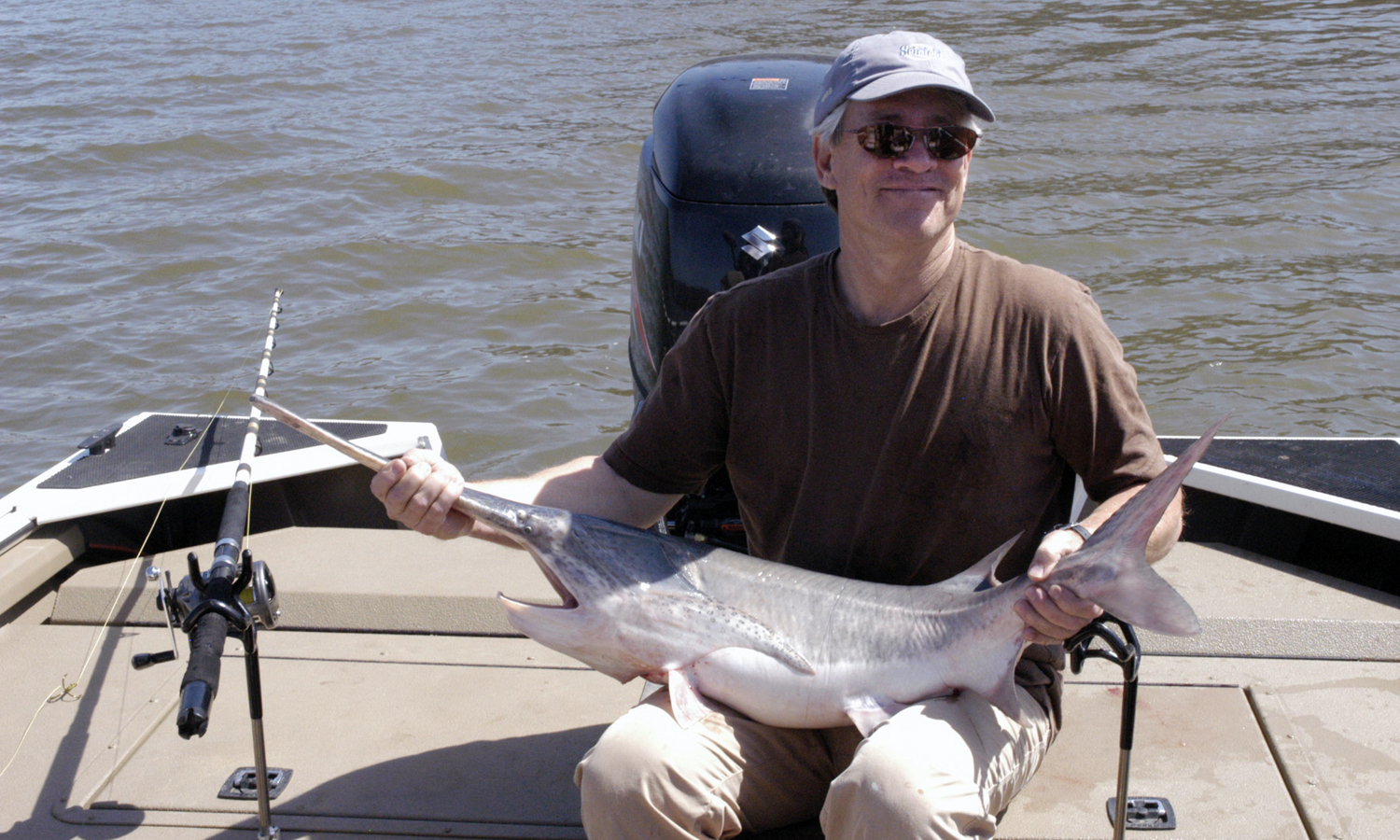 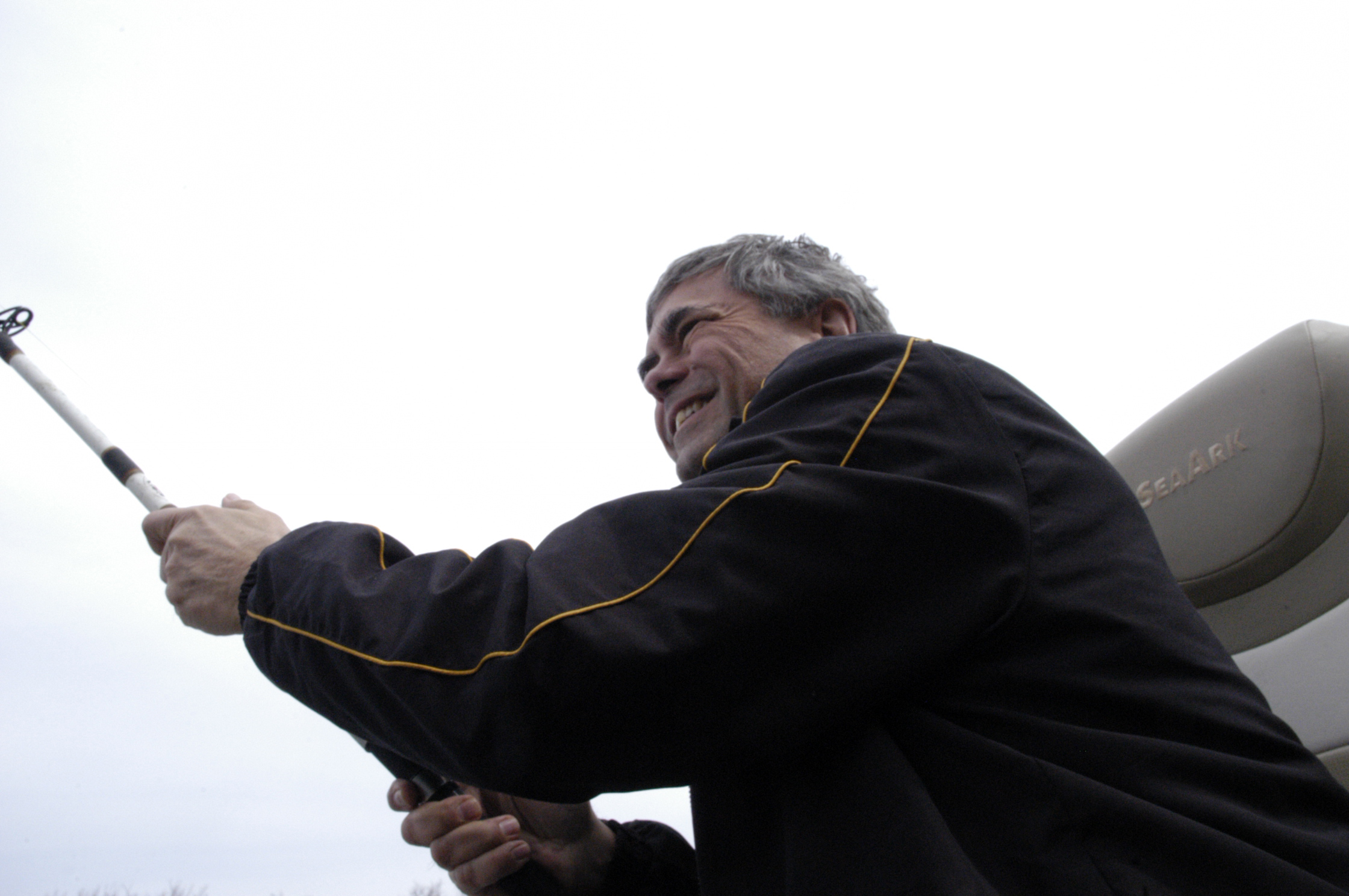 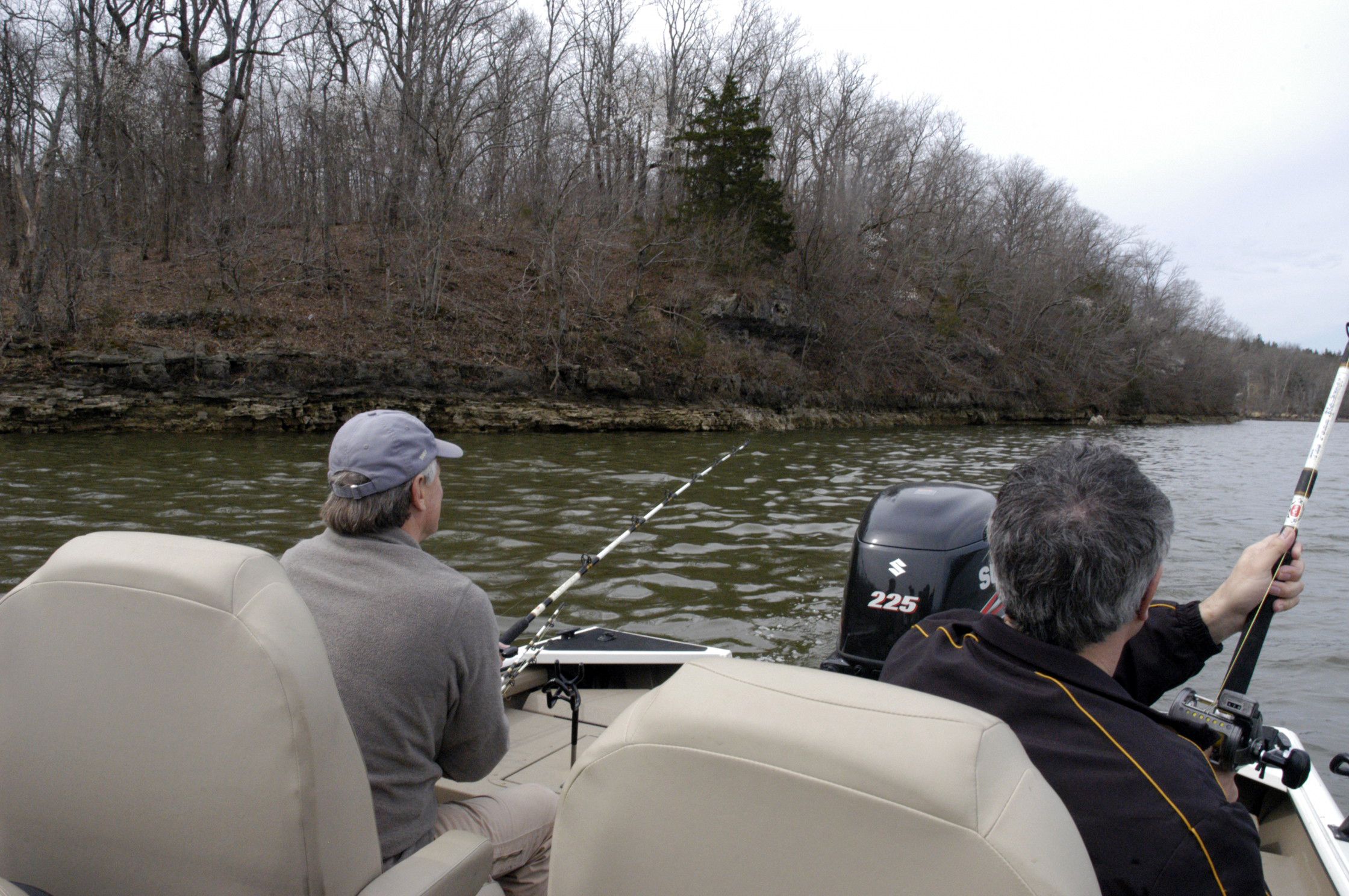 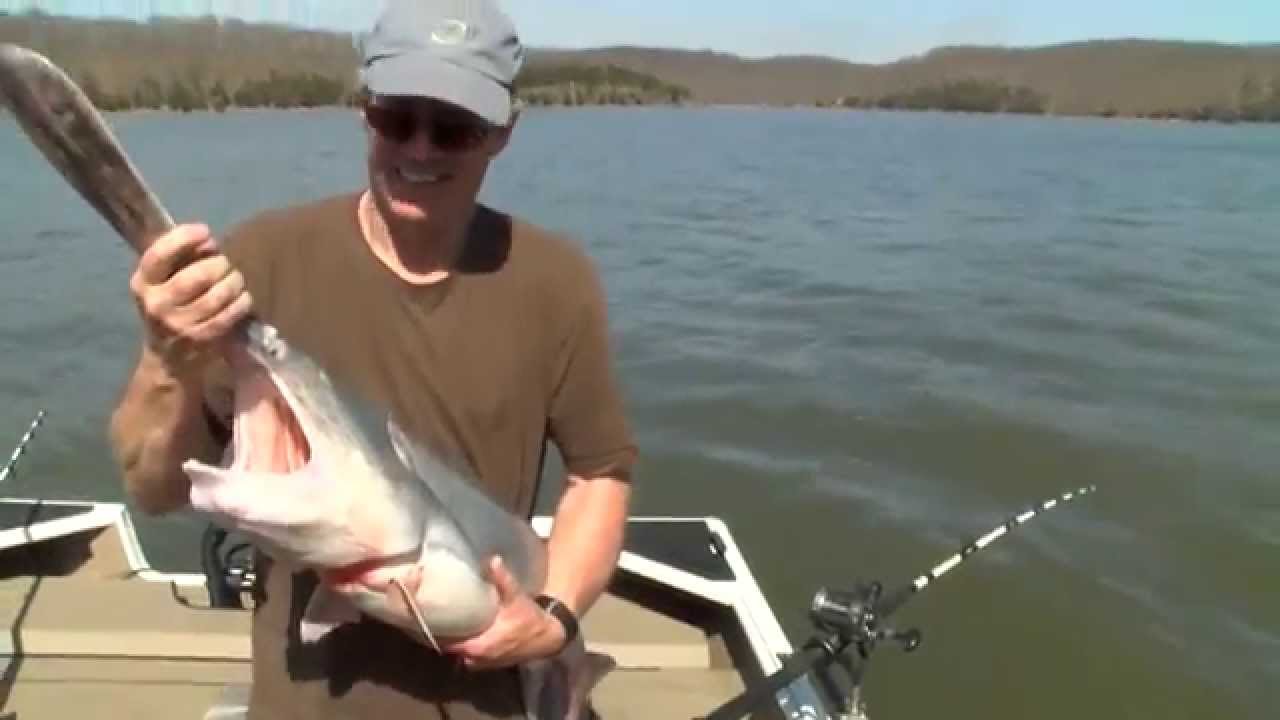 WARSAW, Mo.– These fish aren’t biting. Paddlefish never do. They eat by filtering plankton as water passes through their gills. But here on the Osage Arm of the Lake of the Ozarks, paddlefish do put up good fight after being hooked.

“It feels like all of a sudden you just slam into a wall,” says Mark Bagwell after snagging his first paddlefish. “It’s a lot bigger than the trout in Georgia,” he said.

But it was still a few inches shy of the 34-inch minimum size limit. After holding it in his lap for some pictures, he threw it back.

It’s not unusual to catch a 50- or 60-pound paddlefish in Missouri, and some grow to well over 100 pounds.

“Not only a large fish, but also a very unusual fish,” adds Mark Morgan, a longtime friend of Bagwell and an associate professor at the University of Missouri’s College of Agriculture, Food and Natural Resources.

Morgan, a researcher in the field of the human dimensions of natural resources, has appeared on ESPN as an academic authority on catfish noodling, a barehanded angling technique that is illegal in Missouri. He recently published a study on paddlefish snagging at Lake of the Ozarks.

Paddlefish, also called spoonbills, have been around at least 70-75 million years. When dinosaurs walked the earth, paddlefish prowled the waters. A distinctive feature is their long, flat snout, called a rostrum, which apparently helps them feed by detecting faint bioelectric fields of nearby plankton.

On Brown’s 20-foot boat, technology provides a similar tool: a sonar fish finder. Paddlefish show up on the screen as unusually large blobs as the boat passes overhead. A cluster of blobs is his cue to slow the boat and tell Bagwell and Morgan to cast their lines.

Because you can’t attract paddlefish and other filter feeders with bait or lures, the usual way to catch them is by snagging: Attach a sinker and a couple three-barbed hooks to your line. From the back of a slow-moving boat, cast the rig and pull back hard. Repeat until you snag something.

Some anglers view snagging as unsporting. Most states either limit snagging to a few species or prohibit it altogether.

But Brown says snagging is becoming mainstream. “This sport’s getting so popular,” he says. “Even five, six years ago, it wasn’t like it is now. Used to be just kind of the same people, bunch of good old boys, but on a weekend now you’ll see everything from bathtubs to yachts out here snagging.”

Paddlefish snagging is big business for Warsaw, Missouri, a town of 2,100 adjacent to both the Truman Reservoir and the lake’s Osage Arm. Snagging season here runs from mid-March through the end of April, when paddlefish are migrating upstream to spawn. The creation of Truman Reservoir in the 1970s flooded the Osage River gravel bars that had served as paddlefish spawning grounds. But tourism dollars make paddlefish snagging economically important, so every year the Missouri Department of Conservation stocks the Lake of the Ozarks and Truman Reservoir each with 15,000 fingerlings from a hatchery in Saline County.

Morgan says he was surprised to learn that Warsaw draws snaggers from well beyond the Missouri state line. The 423 snaggers he surveyed traveled an average distance of 200 miles, one-way.

Paul Wiebelhaus drove 300 miles from Omaha, Nebraska. Standing on the dock at a marina and inn called The Old Oar House, he says he’s been coming to Warsaw with eight or nine friends every spring for about 20 years. He also snags up in South Dakota, where he’s originally from, but he’s partial to snagging in Missouri.

“Bigger fish, more fish, better people, good accommodations,” he says. “If you’re going to snag, this is the place to go.”

Morgan notes that paddlefish provide one of the few nearby opportunities for Midwestern anglers to catch the kind of exotic-looking trophy fish often associated with saltwater fishing—and to battle a worthy opponent.

“Part of the appeal of paddlefish snagging is ‘man vs. beast,’” he says. “There’s a lot of muscle involved. When you’re trying to catch a 50- or 60-pound fish, there’s a macho element associated with it.”

Wiebelhaus describes the sport as a “combination of hunting and fishing.”

“It’s got a little redneck in it, let’s just be honest,” he says. “Why do it? It’s just fun. Some people go shopping at the mall for fun. This is camaraderie with my friends. It’s just what we do.”

Paddlefish snaggers on Lake of the Ozarks.

Paddlefish snaggers on Lake of the Ozarks. University of Missouri

The paddlefish Mark Bagwell caught was under the 34-inch limit and was released.

The paddlefish Mark Bagwell caught was under the 34-inch limit and was released. University of Missouri

Mark Morgan snagging at Lake of the Ozarks.

Mark Morgan snagging at Lake of the Ozarks. University of Missouri