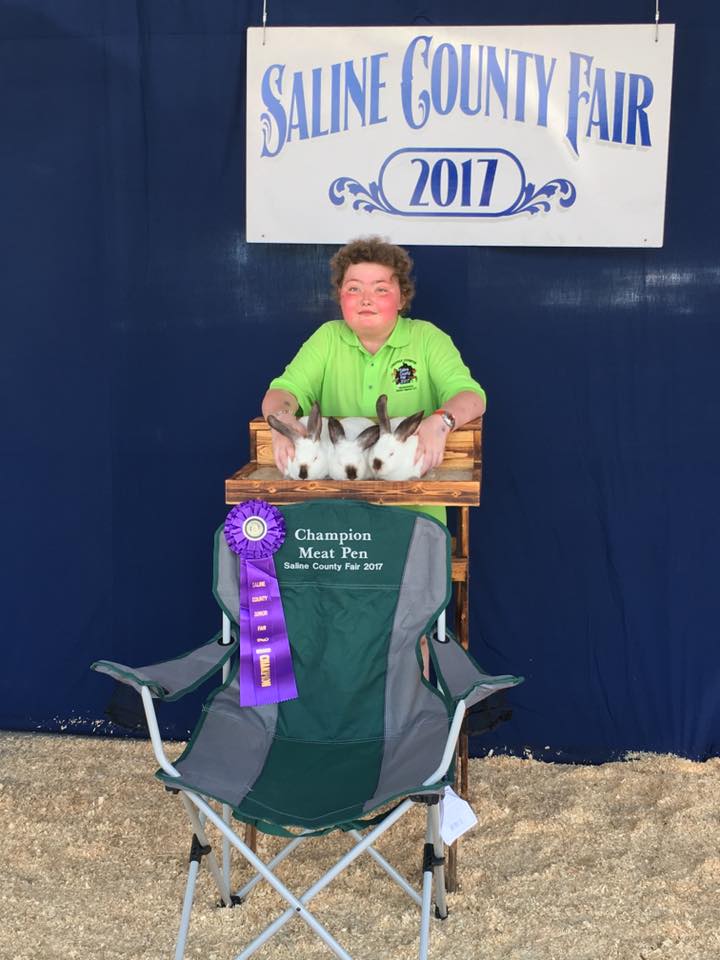 MARSHALL, Mo. – Fairgoers at the annual Saline County 4-H and FFA Youth Fair got more than they bid for this year.

4-H and FFA members and the crowd raised almost $10,000 for Haley Browning, a terminally ill 10-year-old from Marshall. Doctors found cancer after she had a seizure last year. She was airlifted to Kansas City, where doctors found a mass on a kidney.

Before the fair sale, board members voted to donate 1 percent of the auction proceeds to Haley’s medical fund. They broke tradition and let Haley sell first in the show.

Fair superintendent Brent Murphy opened the fair to tell Haley’s story. He spoke about her journey with cancer and dedication to the fair. Despite being in Kansas City three times during fair week for treatment, she committed to showing her animals.

Wood & Huston Bank of Marshall bid high with $2,500 for Haley’s Grand Champion Meat Pen of rabbits. Then, 32 others started yelling in donations of $25 to $250 to the auctioneer for the Grand Champion. Final sale price: $6,785.

When other 4-H and FFA exhibitors sold their animals, they joined in. They donated part of their premium to Haley. They gave $2,875.

“There wasn’t a dry eye in the house,” said Haley’s mother, Dorrian Browning.

“It was one of the most moving things I’ve ever seen,” said Jacob Hall of University of Missouri Extension’s Northwest Region 4-H council. “It was really awesome. In Saline County, we showcase the family aspect of 4-H.”

Haley’s family lives and breathes 4-H. She is a third-year member of the Town & Country 4-H Club in Marshall. Her mother, grandmother and grandfather belonged to 4-H clubs in Saline County. Her mother is assistant superintendent of the Missouri State Fair rabbit show. Her siblings also belong.

DeEtta Murphy, county fair auction superintendent, said 4-H and FFA give young people a chance to learn to give back to their communities. “We try to teach our 4-H and FFA members life lessons.”

Memories of this year’s fair will remain with youth forever, she said. “It just rolled with people’s generosity. It was very emotional. It was about one of our 4-H and FFA fair family members.”

“4-H youth engage in their community,” said state 4-H specialist Bradd Anderson. “They care. They give back. And they find themselves part of a much larger family. 4-H is more than baking or showing at the fair. Kids help kids and families get involved. Communities grow stronger.”

Haley’s father, Justin Browning, manages the feed mill at Ham Hill Farms. Her 9-year-old brother, Hunter, and 6-year-old sister, Hannah, attended the auction, as well as her grandparents, great-grandmother and other relatives. Neighbors and fair supporters also cheered her on.

Haley Browning with her champion rabbits.

Haley Browning with her champion rabbits. Photo courtesy of Saline County Fair Board