Annual lespedeza is primarily used as a pasture legume, although it is sometimes cut for hay. It provides high-quality forage in midsummer when other cool-season grasses and legumes are struggling. It also grows better than other legumes on infertile or shallow soils. Like birdsfoot trefoil, it does not cause bloat. However, it is not problem-free. Its annual yield is lower than that of other legumes, and it does not have as broad a window of forage production. Korean types have proven susceptible to a number of foliar diseases. Annual lespedeza can be valuable in July and August. 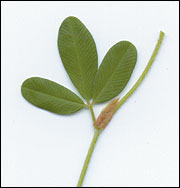