Gray leaf spot, also called blast, was first observed on perennial ryegrass throughout the eastern half of the United States in 1992. The epidemic resulted in extensive damage to golf course fairways and athletic fields. The disease now occurs in most areas of the country where perennial ryegrass is grown. Disease development is sporadic with little or no disease development in some years. Nevertheless, the potential destructiveness of gray leaf spot forces many turfgrass managers to apply preventive fungicide applications every year.

Symptoms can be confused with those of 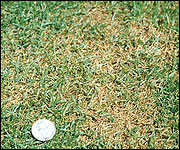 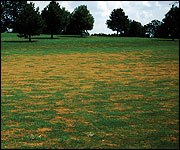 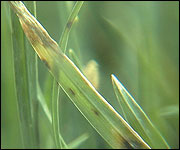 Gray leaf spot often develops first in heat or drought prone areas such as the tops of small mounds or on steep slopes. The diseased turf first appears droughty even though soil moisture is sufficient but soon collapses and turns a dull brown (Figure 1). The fungus may quickly spread from these diseased patches and cause extensive blighting if weather conditions are favorable for infection (Figure 2). In some years the disease never progresses beyond blighting in these "hot spots." Other turfgrass species that may be mixed in with the ryegrass, including Kentucky bluegrass, annual bluegrass and creeping bentgrass, are not affected by the disease. Blighting can continue through late summer and into early fall and cause significant damage to young ryegrass seedlings emerging from fall overseeding.

Small, chocolate-brown spots about 1/16 inch in diameter develop on leaves (Figure 3). During early disease development, these leaf spots may not be numerous and can be easily overlooked. Depending on weather, multiple coalescing leaf spots will girdle and kill both leaf and crown tissue. Dying leaves tend to develop a characteristic twist at the leaf tip, which helps differentiate this disease from brown patch or Pythium foliar blight (Figure 4).

Pyricularia grisea sporulates prolifically in the center of lesions during periods of high relative humidity (Figure 6). The conidia (spores) are spread by wind, splashing water and equipment to infect new leaves. New foliar symptoms appear within a few days of infection.

Factors that trigger epidemics include high temperatures or extended periods of leaf wetness interspersed with intermittent dry periods. Symptoms develop under hot (82 to 90 degrees F), humid conditions. At these temperatures, infection occurs with a leaf wetness period as brief as 9 hours. The lower the temperature, the longer leaves must remain wet for infection to occur.

Seedlings are more susceptible than older plants to P. grisea, especially under high levels of available nitrogen. Gray leaf spot is often more severe in roughs than on fairways. This is probably related more to microclimate differences in duration of leaf wetness within the turfgrass canopy rather than to height of cut.

On turf facilities with a history of gray leaf spot, cultural practices alone are unlikely to control gray leaf spot. Fungicide applications beginning in early to mid-August and continuing through September at regular intervals may be required to prevent damage on golf course fairways and athletic fields. Although thiophanate methyl and the QoI fungicides provide the best control of gray leaf spot, their use should be limited to one or possibly two applications per season to prevent the selection of fungicide-resistant strains. Instead, rotate with other fungicides listed in Table 5.

On sites where gray leaf spot is a chronic problem, it may be advantageous to replace perennial ryegrass with Kentucky bluegrass or creeping bentgrass.