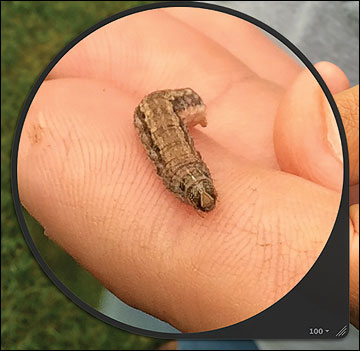 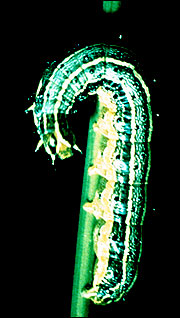 The fall armyworm is susceptible to extreme cold temperatures, and therefore doesn't overwinter in Missouri. Moths migrate into Missouri in late spring and lay eggs of first generation worms. Two to three generations occur during a season in Missouri, with most problems occurring in late summer and fall after several generations have increased the population. Armyworm larvae feed on all aboveground leaf tissue, and as the name implies, the population moves as an "army" across a turfgrass stand rapidly causing widespread bare areas. Damage is often associated with lush turfgrasses, so restricting summer nitrogen may help limit the problem. Because armyworm occurrences are sporadic, turfgrass stands should be carefully monitored so curative treatment can be applied if necessary.

This mite is a more serious problem of bermudagrass on golf courses, home lawns and commercial landscapes in southern states than it is in Missouri. The mites live and feed under the leaf sheaths. Infested bermudagrass will appear weak and off-color in the spring and does not respond to irrigation or fertilization. Leaf blades are often twisted and yellow at the tips. "Tufted" or "rosetted" growth results from shortened stem internodes. If not treated, the bermudagrass will thin and die out. Hot, dry weather will enhance the symptoms when the grass is under stress. 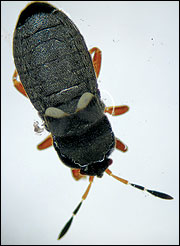 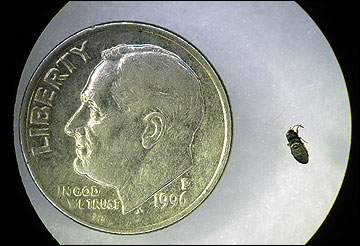 Chinch bug damage starts as small yellow or brown discolored areas, with individual leaves often having an orange tinge. Damage progresses rapidly as the population increases. Nymphs and adults are sap feeders at crowns and stems, and inject a toxin in their saliva that disrupts water and nutrient movement. Young nymphs are orange-brick red with a white band across their back, whereas adults are about 3/16 inch long and black with small wings. Adults overwinter in protected areas and emerge in May, with a second generation arriving in July or August. Chinch bug damage is normally most severe in full sun and along sidewalks and driveways. Generally, treatment is only necessary during the second summer generation, with best results achieved by treating the damaged area and at least 3 feet beyond, or the entire lawn. 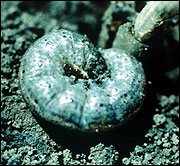 Cutworm caterpillars feed at night and cut grass blades off close to the ground in a circular pattern around their burrows. This feeding produces brown spots 1 to 2 inches in diameter. Variegated cutworms are occasional pests of lawns, but the black cutworm is a perennial problem on creeping bentgrass golf greens. Adult moths may migrate from southern states and lay eggs on the leaves and stems of plants, preferring lush, dense stands. One to four generations occur per season. Light cutworm infestations are often adequately controlled by predators (birds) and parasites. If necessary, insecticide treatments should be applied late in the day and allowed to dry on the leaf surface. 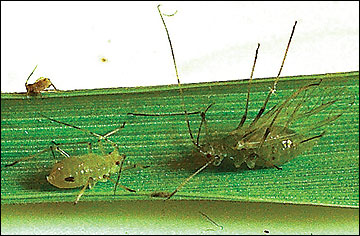 Like chinch bugs, greenbug aphids feed on plant sap and inject a toxin in their saliva that results in plant collapse and death. Damage appears in brown, irregular patches with yellow to orange colored with margins. Damage normally occurs in mid to late spring in Missouri, as greenbug populations can rise rapidly and are not yet held in check by natural enemies such as lady beetles, parasitic wasps or lacewings. Routine scouting for the numerous small greenbugs on leaf blades should be conducted in the spring, and treatment should be made only when necessary. 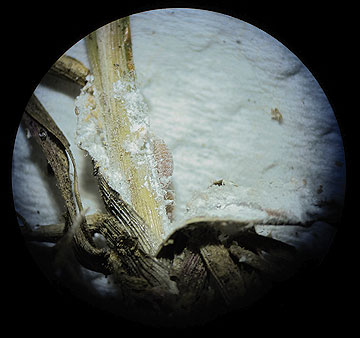 Mealybugs are an occasional pest problem, mainly on zoysiagrass lawns in Missouri. Mealybugs feed by sucking plant sap from under the leaf sheath at the nodes or crown of the plant. Damage is often a general discoloration and wilting symptom often mistaken for drought. Mealybugs are covered in a white, waxy secretion that resembles fungal mycelium and often covers the leaf sheath and crown of the plant where feeding has occurred. Turfgrasses can often tolerate some mealybug feeding without injury until natural enemies can reduce the population, so selecting proper turfgrasses and alleviating stress may eliminate the need for treatment. If treatment is necessary, thorough coverage and tank-mixing a surfactant may aid control. 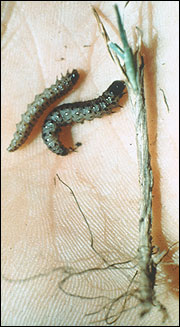 Several genera in the family Crambidae

Damage from sod webworms is first noticed as small irregular brown patches, with grass blades chewed of at or just above the soil surface. The adult is a buff-colored moth with a 1-inch wingspan that looks tubular when at rest because of the way the wings wrap around its body. Webworm larvae are about 1 inch long and gray, with brown spots on each body segment. Larvae often hide in silk-lined, pencil-sized tubes within the thatch layer, which is a sign of their activity. Two to three generations occur during a season, and damage can be expected during the late summer when populations are peaking. Except under drought conditions, most webworm damage occurs on high-amenity turfgrasses, such as golf greens, new sod fields or newly established lawns under high fertilization. Endophyte-enhanced turfgrasses, such as tall fescue, are toxic to webworm larvae and should be used where possible. If treatment is necessary, leave residue on leaves as long as possible.