Various genera in the family Formicidae 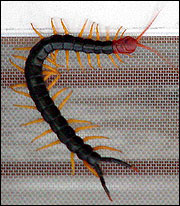 Various genera in the class Chilopoda

Primarily, centipedes are nuisance pests that are found under boards or in mulches. Occasionally, they will invade buildings during dry weather. Chemical control for these pests is rarely necessary. Removing thatch from turf and keeping mulches away from buildings will help prevent centipedes from becoming a nuisance. 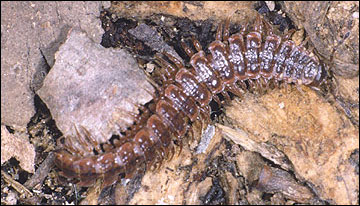 Various genera in the class Diplopoda

Primarily, millipedes are nuisance pests that are found under boards or in mulches. Occasionally, they will invade buildings during dry weather. Chemical control for these pests is rarely necessary. Removing thatch from turf and keeping mulches away from buildings will help prevent millipedes from becoming a nuisance.

Chigger mites can be found where vegetation is abundant. They can become a serious problem in relatively dry areas. Chigger mite larvae will cling to clothing or bare skin. They insert their mouthparts in a skin pore or hair follicle. After engorging themselves, the larvae will drop off. Their feeding can cause severe irritation and itching. Apply a recommended commercial repellent to your clothing and legs. A hot, soapy bath soon after exposure will help prevent or reduce the number of bites. Although a nuisance to humans in outdoor settings, chiggers do not damage turfgrass. 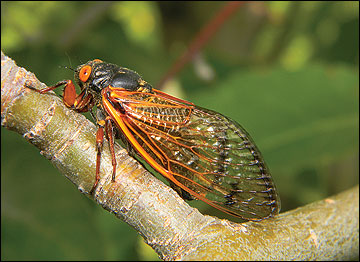 Various species in the genus Magicicada

Cicadas are large, robust sucking insects that are most noticed from the screechy mating call of the males on trees. Fortunately, these masses of cicadas usually occur only once every 13 or 17 years in a given area. Periodical cicadas have a fat, wedge-shaped, nearly black body with clear wings. Their eyes are red, and their legs and veins in their wings are orange. It is not practical to control the nymphs because they live 12 inches underground. Small trees can be sprayed or covered during the peak emergence period to prevent twig damage. 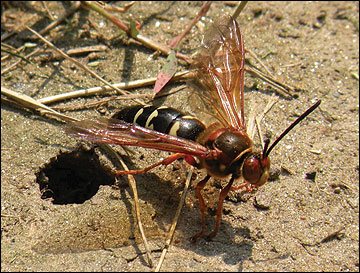 Small mounds of soil can be seen on top of turf coming from ¾-inch-diameter holes excavated by the adult cicada killer wasp. Thoroughly spray or dust around nest openings when treatment is required. The female wasp can inflict a painful sting. 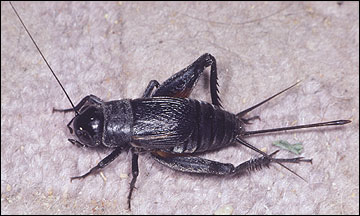 Various genera in the suborder Ensifera

Crickets become numerous under boards, rocks and other damp hiding places around the lawn. They often invade buildings and are generally considered a harmless, noisy nuisance. 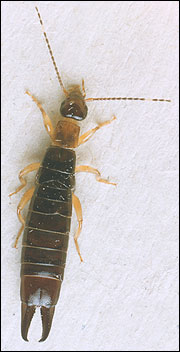 Various genera in the order Dermaptera

Earwigs are fast-moving, small insects that can become numerous. They forage during the night and burrow into the soil during the day. They are beetlelike insects about ¾ inch long with a pair of "forceps" on the abdomen. They do little or no damage to turfgrasses; however, they use piles of grass clippings as breeding sites. 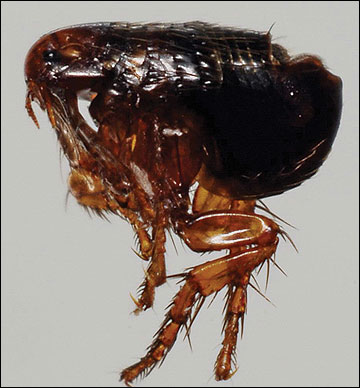 During the warmer months, lawns can become heavily infested with fleas when infested pets rest or sleep on the lawn. Adult fleas will hop onto humans and suck blood, which causes irritation and itching. In lawns or outdoor pet quarters, the immature flea will feed on the excrement of rodents or pets and on decaying organic matter. Treat entire lawns and pet quarters. Use flea collars on pets. 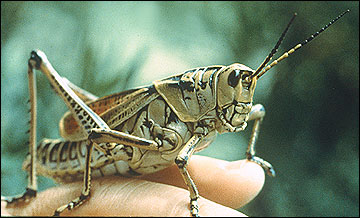 Various genera in the suborder Caelifera

Grasshopper populations can build to massive numbers following several seasons of dry weather; however, in most years, numbers are not at harmful levels. Grasshoppers feed on the tender parts of grass and other plants, but there are generally enough natural predators to keep this insect under control. Grasshoppers are a nuisance only in well-kempt turf, and actual injury is an extreme rarity. 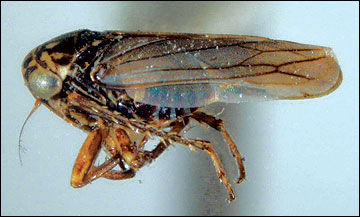 Various genera in the family Cicadellidae

Leafhopper adults and nymphs feed on juices with their piercing-sucking mouthparts. Heavily infested turf tends to become mottled or bleached, and it then dries out as if under drought stress. Leafhoppers rarely cause severe damage to healthy lawns. Clouds of leafhoppers in flight may be noticed ahead of mowers. 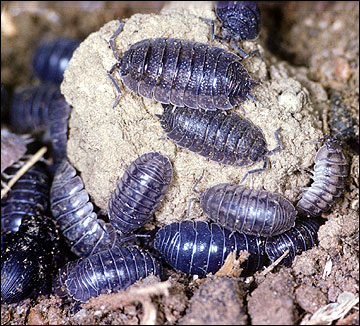 Pillbugs and sowbugs often become numerous under stone walks, boards and other damp hiding places around the lawn. Although they chew on roots of vegetation, they primarily feed on decaying organic matter. Even though the pillbug and sowbug are found almost everywhere, they are generally considered a harmless nuisance.

Various genera in the order Araneae

Spiders are generally considered beneficial; however, some can cause irritating bites. Spiders are evident when spider webs are noticed in the early morning dew. They do not cause any turf damage and are considered more of a nuisance. 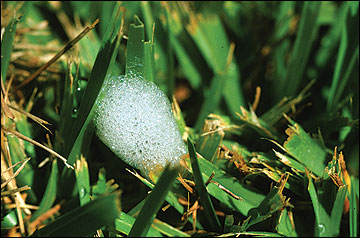 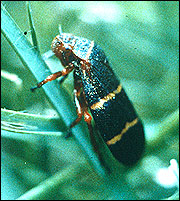 Spittlebugs feed on clover, legumes and ornamentals, but they are rarely a problem in turf. When the spittlebug becomes plentiful in turf, the grass is generally competing with an unlimited supply of weeds and clover. The tiny, pink to yellow-green nymph is seldom seen but causes widespread damage. It attaches itself to vegetation and encloses its body in a mass of white foam or "spittle." It drains the fluid from the plant and remains hidden in the spittle until fully grown. Insecticide applications should be made in July with the second generation. 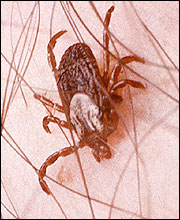 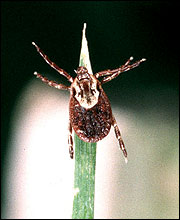 Ticks are leachlike parasitic pests that sometimes become more than a nuisance. Tick bites can cause itching, irritation and infection. The likelihood of infection is increased if the tick is removed incorrectly, which causes the mouthparts to remain in the wound. Ticks can transmit serious diseases to humans and pets. Ticks are seldom a problem in a well-maintained lawn, but they often infest edges bordered by tall weeds and brush. Treatments are most effective when applied along borders, brushy areas and footpaths that are routinely traveled. 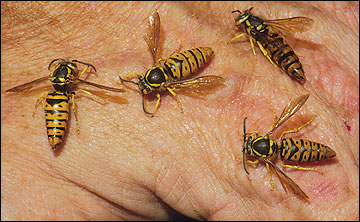 Yellowjackets are the most likely dangerous stinging insect in the United States. Their name is based on the distinctive black and yellow color pattern of their body. Nests are often located underground, and yellowjackets become extremely aggressive when their nests are disturbed. If the nest can be located, elimination of the colonies should be done only at night when most of the yellowjackets are in the nest and less active. Aerosols and dust formulations of pesticides usually work best.