Caterpillars in Your Yard and Garden - Page 13 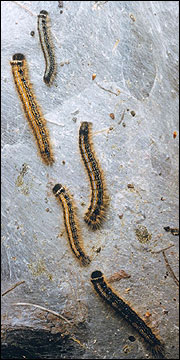 Eastern tent caterpillars (Malacosoma americanum) are present from early spring to June. They produce one generation per year.

Full-grown caterpillars are mottled with a middorsal longitudinal, white stripe outlined by a narrow black line and bordered by a concentration of orange, wavy lines. Laterally, the body may have orange stripes, but there are blue and white markings on each segment just above the spiracles. Arising from the sides of the body are light-brown hairs. Host plants include apple, cherry, peach and plum, with serious damage often occurring on wild tree hosts.

Tent caterpillars belong to the Lasiocampidae family. Many caterpillar species of this group construct a thick, silken "tent" in the crotches of branches or small limbs on the host tree. The larvae do not feed inside the silken structure as the does the fall webworm. Rather, during the day, they leave the protective silk nest and feed on the foliage of neighboring limbs. Several species are important pests of forest and shade trees.