The massasauga rattlesnake is found in the northern half of the state (Figure 4). Adults range in length from 18 to 26 inches. It lives in marshy areas or wet prairies and may take shelter in burrows of crayfish or other animals. Rodents are its main food source. In Missouri, females produce a litter every other year. Litter size is four to 10, born during August or September. Larger females tend to have the greater number of young. Although this species has very toxic venom, there are few records of human deaths caused by this small rattlesnake. Massasaugas have become rare in Missouri because of habitat destruction and are on the state's endangered species list. 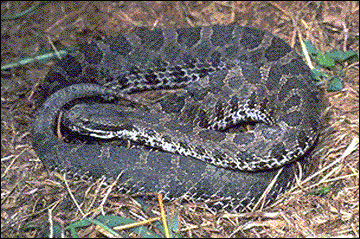