Spiders belong to the order Araneae of the class Arachnida. They are most closely related to scorpions, ticks and mites. Spiders have a body composed of two regions called the cephalothorax (head) and abdomen (body). They have eight legs, no antennae or wings, and an unsegmented abdomen. Four, six or eight eyes are located at the front of the cephalothorax. Also located at the front of the cephalothorax are the pedipalps, appendages used for handling food. (See above.) Spinnerets are located on the posterior tip of the abdomen. These structures are used to produce silk. Silk is used by spiders to make webs, construct egg sacs, line nests, wrap captured prey, or construct "balloons" with which to travel on air currents over large distances.

More than 300 different spiders occur in Missouri. Some of the more common groups include orb weavers, crab spiders, jumping spiders and wolf spiders. These groups are distinguished by the size and shape of their bodies, the structure of the legs and other appendages, and the size and relative position of the eyes. Tarantulas are not very abundant in Missouri but are occasionally collected from the southern part of the state. The brown recluse spider and black widow spider are the only two spiders in Missouri that are considered to be serious threats to human health. Most other species are considered nuisance pests when found in and around homes. 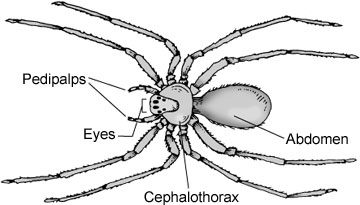 Characteristic form and structure of spiders.

All spiders are predators and should be considered beneficial in this role. They play an important role in regulating insect and other arthropod populations in many different ecosystems. Spiders have a pair of hollow, fanglike mouthparts and venom-producing glands that they use to subdue their prey. They pierce the exoskeleton and inject venom through their fangs like a hypodermic needle. The venom typically paralyzes their prey. They also inject digestive juices that break down the internal tissues. Later, they use their mouth like a drinking straw to suck out the body fluids.

Not all spiders catch their prey in the same way. Some sit and wait on a web, while others leave their webs and actively stalk prey. Most spiders are active at night and usually remain hidden during the day. They will quickly run away when disturbed, unless they are guarding an egg sac or young spiderlings.

Within a week after mating, females deposit eggs in a silken egg sac. The number of eggs deposited and the number of egg sacs produced by a single female vary according to species. It takes from a few weeks to a year for the eggs to hatch and the young spiderlings to emerge. Young spiders typically climb to a high point in their surroundings with suitable air currents, spin silk threads into the air and float away like tiny parachutists. This behavior is called ballooning and aids in dispersal.

Spiders generally live for only one or two years, but a few species can live as long as 5 to 20 years. Spiders grow by molting. This process consists of producing a new exoskeleton beneath the old one, splitting the old exoskeleton and climbing out, enlarging the body, and hardening the new exoskeleton. The molting process occurs repeatedly throughout the immature stages, but after reaching maturity, the vast majority of adult spiders do not molt. It is not unusual to see accumulations of shed exoskeletons in undisturbed areas of homes with large spider populations.

People tend to fear spiders because they believe that spiders are aggressive and seek to bite humans. This is an unfounded fear. While it is true that spiders will rush across their webs to investigate a vibration, this is just a natural hunting reaction to disturbance and should not be interpreted as aggressive behavior. Spiders do not attack and bite humans unless they are threatened or provoked in some way.

When a spider bite occurs, the victim is often unaware that it happened. Serious injuries or fatalities from spider bites are extremely rare. Very few spider species are considered to be a threat to human health, but the bite of the black widow or brown recluse spider can be serious. The reaction to a bite from these spiders can range from mild to severe, depending on the individual that is bitten and the amount of venom injected. The amount of venom injected varies from almost none to a full dose, depending on the quantity of venom in reserve at the time of biting, the length of time the fangs are in the tissue and even the location of the bite. Additionally, the reaction of different individuals to the same amount and type of venom will vary widely.

Outside, treat around doors and windows, under the eaves of the roof, under porches and in crawl spaces if they are accessible. When homeowners are practicing good prevention and sanitation strategies, perimeter treatments by a professional pest management company can be helpful. These professionals are trained and licensed to use highly effective spider-control chemicals that are not available to homeowners directly. However, even these chemical barriers eventually break down, so additional treatments would be needed to help ensure long-lasting spider control.

Daddy longlegs are not spiders but resemble them in shape and number of legs. They have segmented abdomens and only two eyes and do not produce silk. They are rarely found in the living areas of a home.