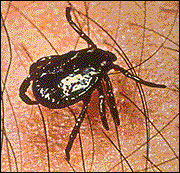 Ticks are close relatives of mites, spiders and scorpions. Ticks pass through four stages in their life cycle: egg, larva, nymph and adult. All stages except the egg are blood-sucking parasites. Tick larvae hatch from the eggs, are small, have only six legs, and are often called seed ticks. Immature and adult ticks are most likely to be encountered in wooded or brushy areas where their hosts are most abundant, but they can also be found in lawns if their hosts are present there.

The larvae and nymphs often feed on smaller animals and birds. Some nymphs and adults typically feed on larger animals, including humans and their companion animals.

Ticks locate their hosts by "questing." During questing, ticks climb to the tips of vegetation and extend their front legs out away from their bodies. They hold on to the vegetation with the remaining legs. Because they are sensitive to drying out, they usually return to the base of vegetation several times a day to stay hydrated. As potential hosts pass by questing ticks, the hooks on the ends of the front legs become attached to the host and pull the tick from the vegetation. Once on the host, ticks seek areas to settle, insert their mouthparts and begin feeding. Ticks will also travel short distances toward a carbon dioxide source to locate potential hosts.

The two most frequently encountered ticks in Missouri are the lone star tick, Amblyomma americanum (Figure 1), and the American dog tick, Dermacentor variabilis (Figure 2). Another species, the brown dog tick, Rhipicephalus sanguineus (Figure 3), may also be common on domestic dogs. The brown dog tick only feeds on dogs, but may be brought into homes with dogs and become an indoor pest. Many other species of ticks can be found in Missouri, but they come into contact with people less frequently.

Ticks do not have a true head, only mouthparts projecting from the front edge of the body. The size and shape of the mouthparts are often used to identify different tick species. A tick uses these mouthparts to cut a small hole in the host's skin. The mouthparts are then inserted into the host's tissues to obtain blood. Male ticks have a hard, shieldlike plate that covers the entire top surface of their body, but in females this plate covers only about one-third of the front part of their body. This difference in body structure allows females to swell greatly by stretching the nonhardened portion of their bodies while they imbibe large amounts of blood during feeding. Males take small amounts of blood while feeding and do not become enlarged and swollen.

Tick bites may be irritating, but the possibility of tick-transmitted diseases causes greater concern.

Lyme disease is caused by the spirochete Borrelia burgdorferi. It probably is the most frequently reported tick-borne disease in the United States. Since its discovery in the early 1970s near Old Lyme, Connecticut, it has been reported widely throughout most of the country. The areas of greatest incidence in the United States are the Northeast, the Atlantic seaboard, the Great Lakes states, and northern California. Symptoms of Lyme disease may develop within 2 to 30 days following an infective tick bite. These symptoms include fever, fatigue, headache, aching joints, nausea and a small red bump at the site of the bite. This bump may enlarge to become a spreading red ring called erythema migrans. Rashes and other dermal involvement are most easily seen on light-colored skin. If you don't see a rash, don't assume there is no infection. Some people develop palpitations, dizziness and shortness of breath. Lyme disease may develop to the chronic stage with any of the following symptoms: rheumatoid arthritis (primarily in the joints of the arms and legs), facial paralysis, stiff neck, severe headache, and cardiac involvement. Infection and symptoms vary. Lyme disease in its early phases responds readily to antibiotics.

Several hundred cases of Lyme disease have been reported in Missouri. However, health authorities are unsure whether these cases are in fact Lyme disease or a condition with similar symptoms but caused by a different bacterium. In the northeastern and north central United States, the blacklegged tick, Ixodes scapularis (Figure 4), transmits Lyme disease. The species is found in Missouri but rarely on humans. In the West, Lyme disease is transmitted by the western blacklegged tick, Ixodes pacificus. These unusually small ticks are most likely to transmit the disease after feeding for more than two days. Transmission of Lyme disease by the American dog tick and the lone star tick has not yet been demonstrated.

Other human diseases that are associated with tick bites are tularemia and ehrlichiosis. Tularemia, known most commonly as rabbit fever, is caused by the bacterium Francisella tularensis. This bacterium is highly infective and infections generally follow the skinning of rabbits or rodents, or the bite of a tick or horse fly. Symptoms resemble an influenza attack, with an initial high fever, a short remission and a further fever period of two weeks. A lesion at the site of infection, conjunctivitis and enlarged lymph nodes may follow these symptoms.

Ehrlichiosis is caused by several species of bacteria in the genus Ehrlichia. These rickettsia-like organisms cause disease mostly in dogs, cattle, sheep, goats and horses but may also infect humans. Several human cases have been diagnosed in Missouri. The disease occurs primarily in the southeastern and south central regions of the country and is transmitted primarily by the lone star tick. Initial symptoms occur 5 to 10 days after the bite of an infected tick and generally include fever, headache, malaise and muscle aches. Other signs and symptoms may include nausea, vomiting, diarrhea, cough, joint pains, confusion and occasionally rash. Rashes are more common in children than in adults.

First, avoid ticks if you can. Most ticks inhabit woods and brushy areas with abundant wildlife that serve as hosts. People walking through these areas are prone to tick infestations. If you go into these areas, examine your body thoroughly for ticks the next time you remove your clothing. Ask someone else to examine parts of your body that you can't see.

Prompt removal of ticks will reduce the likelihood of infection dramatically. Most disease transmission occurs after ticks have been attached for longer than 24 to 36 hours. The proper way to remove a tick is to use a strong set of tweezers or forceps. Grasp the tick at the front of the body and as close to the surface of the skin as possible, and slowly yet forcefully pull the tick straight out from the body. Allow the natural elasticity of the skin to provide pressure to remove the tick. Do not grasp or squeeze the rear portion of the tick's body, either with your fingers or with forceps. This can expel the gut contents of the tick into your tissues and increase the likelihood of disease transmission if the tick is infected with disease-causing organisms. This can also cause the tick to break, leaving the mouthparts in the skin where a hard nodule (tick bite granuloma) will remain until your body naturally breaks it down.

Sometimes people wander into large numbers of seed ticks. This can happen even on mowed lawns where a female tick has dropped from a passing animal. Literally thousands of these larvae can crawl up the legs of an adult or all over a child's body. The best thing you can do in these cases is to remove and launder infested clothing and bathe with soapy, hot water to remove the seed ticks. If you notice the problem before seed ticks have attached, use a cotton ball soaked with rubbing alcohol to wipe them off.

If you are in a tick-infested area, use tick repellents. The best available are aerosols containing a 0.5 percent permethrin insecticide that can be applied to your clothing. These products should only be sprayed on clothing, and the clothing must be dry before you wear it. Once applied, these products repel ticks and remain effective through several launderings. You can purchase them at a sporting-goods or outdoors store. Products containing DEET may also be used. This repellent can be applied to the skin and is found in several commercial products for mosquito and insect control, but it is only variably effective against ticks. Always read and follow the label before applying insecticides to clothing or to your skin.

Chemical control in yards and recreational areas is usually not recommended. These areas are usually too large to make this treatment practical. Even when you treat mowed lawns and areas around the lawn, outdoor chemical control is only marginally effective. If you decide to try this anyway, treat tick-infested lawns and a band about 20 feet wide outside of the mowed area with an insecticide labeled for tick control on yards (if the label does not specify tick control in yards, it is not legal to use it in that situation). Always follow label directions, and do not allow children or pets access to the area until the spray has dried. You may need to hire a professional pest management company for this work. Again general treatment of yards is not usually recommended.

You may treat homes infested with brown dog ticks by applying insecticide to cracks and crevices where you see ticks. This may require the services of a professional pest management company.

Tick control on animals is also important. Many pet owners choose simply to remove ticks regularly from their animals by hand. Other pet owners use chemical products to treat their pets for ticks. Dust or shampoo treatments that contain pesticides are often used, but remember that repeated applications are needed when using these products. Tick collars are another option. These collars contain pesticides that kill ticks around the head and neck of pets. Manual inspection and removal of ticks on other areas of the body may still be necessary when using tick collars. In addition, collars need to be replaced occasionally in order to remain effective. When using tick collars, read the package carefully for instructions on use. Do not attempt to use these products for controlling ticks on humans.

Your local veterinarian can prescribe certain pesticides for tick control on animals. These products are spot-on, which means you apply a few drops between the shoulder blades of your pet. The chemicals move through the oils of the skin to provide protection on all areas of the body. These products typically persist for up to a month. They are not repellents, so ticks may still temporarily attach to the animal, but those that attach typically die within 24 to 48 hours.

Apply chemicals only where needed or justified. Before using any chemical, please read the label carefully for directions on application procedures, appropriate rate, first aid, storage, and disposal. Make sure that the chemical is properly registered for use on the intended pest and follow all other label directions. Keep insecticides in original containers, complete with labels, and keep them out of the reach of children and pets. Do not allow children or pets near treated areas before these areas dry. Carefully and properly dispose of unused portions of diluted sprays and empty insecticide containers.