Springtails are tiny insects belonging to the order Collembola (Figure 1). About 700 species of springtails occur in North America, and more than 6,000 worldwide. They are wingless and have limited vision. These and other primitive features have convinced some scientists to exclude springtails from the class Insecta, placing them instead in a separate, exclusive class called Collembola.

Springtails are only about 1 to 2 millimeters long but can rapidly move 3 to 4 inches in a single motion. This represents a distance of about 100 times their body length. Springtails move rapidly because of a “springing” device on their abdomen called a furcula. The furcula is a hinged appendage that is bent forward and is held in place by a latch mechanism called a tenaculum (Figure 2). When the furcula is released, it springs down, sending the springtail through the air.

Springtails are able to breathe through their thin body covering. Water is also able to pass through this covering. Because of the ease with which moisture can escape their bodies, springtails are extremely sensitive to drying out, and many species inhabit soil that contains sufficient moisture and food for them to survive. It has been estimated that as many as 50,000 springtails can inhabit 1 cubic foot of organic topsoil.  Several thousands to millions of them emerge from the soil in large masses when the soil becomes either completely dry or completely saturated with water.

Their food includes decaying vegetation, fungi, bacteria, pollen, algae, lichens and insect feces. The feeding activities of springtails enrich the soil by breaking down these forms of organic matter and releasing the nutrients they contain. Because of these activities, springtails are considered to be a good indicator of soil health. 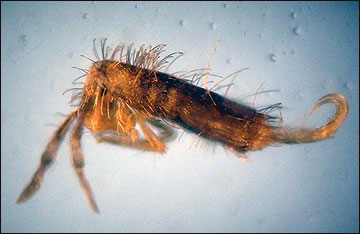 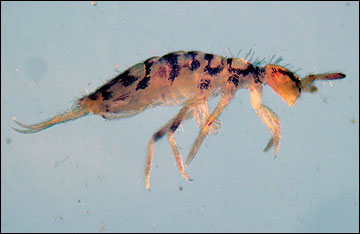 Springtails occur in moist habitats almost everywhere except under water. Many species of springtails even live in the tidal zones of the seashore. Occasionally, large numbers of springtails congregate outdoors in masses as large as a softball. Often, these masses appear on a sidewalk, patio or concrete porch (Figure 3). Other species are called snow fleas because large groups of them will occasionally congregate on old snow banks, where they feed on algae and fungal spores. Snow fleas are usually a velvety black color and stand out in vivid contrast to the snow.

Springtails invade structures in search of moisture when their soil habitat becomes dry. Their usual outdoor habitats include mulch, leaf litter, other decaying organic matter, firewood, logs and landscape timbers. They are attracted to light and are so small that they can enter houses through cracks and crevices around doors, utility pipes, window screens, etc. They can also be brought indoors in the soil of potted plants. Indoors, they are most often found in high-moisture areas such as bathrooms, kitchens, crawlspaces and basements. Moldy furniture is also able to support large infestations. Indoors, they are mainly nuisance pests that are able to survive in areas of high moisture. 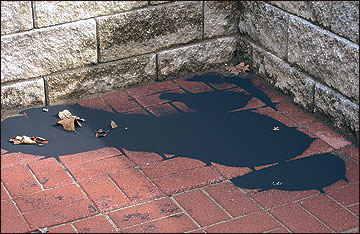 Figure 3
Large numbers of springtails may congregate outdoors in masses after rainfall or when the soil becomes extremely dry.

Nonchemical management is primarily focused on long-term strategies that prevent springtail infestations.  Some key nonchemical strategies for springtails include restricting their entry from outside around windows and doors via caulking, weatherstripping and screening. Inside, minimize moisture sources by repairing leaks, eliminating spills, insulating cold water pipes, and reducing humidity in infested areas.

Homeowners who see these tiny grayish insects in and around houseplant containers are often concerned that they are likely to harm the plants, but springtails do not cause damage to plants. Springtail activity is an indication of healthy, moist, organically rich soil. It is not necessary to initiate control measures if springtails remain confined to the soil of houseplants. However,  if there are so many that they leave the soil to cause a nuisance, . When large numbers of springtails cause a nuisance indoors, they can quickly be removed with a vacuum.

When springtails are found in and around bathtubs and showers, these areas must be cleaned thoroughly and kept dry to correct the problem.

Springtails may be found in wooden windowsills where moisture is causing the wood to decay. Removing the cause of the moisture and refinishing the wood surface will eliminate the attractiveness of these areas.

When large masses of springtails appear on a sidewalk, patio or concrete porch, control measures are rarely needed because the masses usually disappear in a day or two. However, if immediate removal is desired, just spray the mass with water to disperse or wash it away.

Note
Always read and follow directions on the pesticide label.

For a temporary solution to indoor springtail problems, you can use a household aerosol spray.  However, you will need to restrict entry and manage moisture issues indoors to prevent future infestations.

When immediate control is necessary outdoors, treat the soil surface and the foundation surrounding the building with an insecticide that lists springtails on the label. Make sure to treat any exterior cracks in the foundation. Several products containing pyrethroids (products with various names ending in -thrin) are labeled for use around the home. Most of the products that you can purchase over the counter for indoor insect control are pyrethroids.  These compounds are normally only active for a short time before they break down and have no effect.  Some common pyrethroids that are effective against springtails include fluvalinate, bifenthrin, cyfluthrin and deltamethrin.