Revised by Bruce A. Barrett
Division of Plant Sciences

The elm leaf beetle attacks all species of elm, especially Siberian elm (commonly called Chinese elm) and American elm. The insect feeds on the leaves, causing the leaves to dry up and die. This foliage feeding by itself generally will not kill the tree. But it will weaken the tree and make it more susceptible to branch dieback and attack from other insects and diseases, such as Dutch elm disease. This serious disease of American elm is not transmitted by the elm leaf beetle but is carried by the elm bark beetle, which does attack weakened trees. The elm leaf beetle also may become a household nuisance by migrating into homes and buildings during the fall months.

Eggs are laid in groups of 10 to 30 on the underside of leaves. They are pointed, orange-yellow and about 1/16 inch long.

The larva is the elm leaf beetle’s most destructive life stage. When full grown, it is about ½ inch long and is dull yellow with two black stripes.

The pupa — the stage in which the larva changes to an adult — usually is found around the base of elm trees. The pupae are about 1/4 inch long and bright orange-yellow.

The adult beetle is about 1/4 inch long and yellowish to olive green, with a black stripe along each side of the wing covers (Figure 1). The stripes are sometimes indistinct in the dark olive forms. The adult has black eyes and has four black spots on its thorax.

The elm leaf beetle passes the winter as an adult under the bark of trees or in sheds, barns or houses. It is not harmful to humans, other animals, dwellings or household contents, but it is considered a nuisance inside the home.

As the days cool in the early fall, the adult beetles seek shelter. They crawl into homes and other buildings through cracks and holes in and around screens, windows and door facings.

When the days warm up in the spring and the trees begin to leaf out, the adult beetles begin their annoying movement about and leave the house. They fly to the nearest elm tree and begin feeding on the new leaves. At this time, they lay eggs that hatch in about a week. The larvae feed for two or three weeks (Figure 2), then drop or crawl to the base of the tree, where they pupate. After about 10 days, the adults emerge.

Successive generations continue through the summer and into the fall, when the adults, seeking shelter for hibernation, again invade the home. The northern half of Missouri usually sees three generations each year, and the southern half, four. 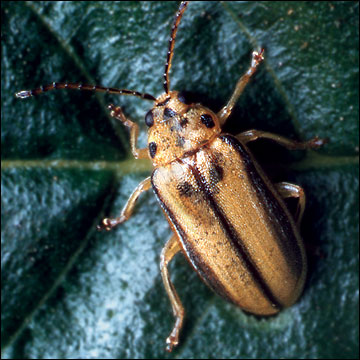 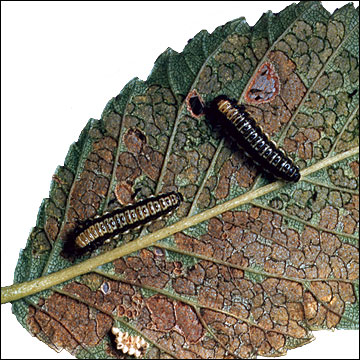 The first step in preventing entry into the home is to control these beetles at their source — elm trees.

On trees
Thorough coverage of all foliage is necessary. So, use spray equipment that is of sufficient size and capacity to enable coverage of the tallest trees. A good time to treat is when the larvae are near the base of the tree and prior to pupation. At this time, only the trunk of the tree needs to be sprayed.

A community-wide control program is more effective when sprays are applied to protect the trees from the first-generation larvae. When only a few trees are sprayed, later generations of beetles moving from unsprayed trees frequently will reinfest sprayed trees, thus making additional spray applications necessary.

In the house
Make the house as tight as possible in an effort to prevent entry. Stuff cotton in sash cord channels, and use caulking compound to fill cracks around doors and windows and all other openings large enough for insects to go through.

To control beetles crawling on and into buildings, spray the exterior foundations, outside walls and around window wells and other exterior points of entry with appropriately labeled insecticides.

Use household sprays or aerosols containing pyrethrins to kill beetles that get into the home. Repeated applications will be necessary. Beetles may be captured or collected for disposal with a vacuum cleaner.

Caution
Insecticides are poisons and should be handled with care. Read and follow label recommendations and directions. Store pesticides safely and out of reach of small children. Carefully, promptly and properly dispose of unused portions of diluted sprays and empty containers.