Facts at a glance

The black cutworm, Agrotis ipsilon (Rottemburg), is a globally distributed species. Within the different regions of its home range it may have other common names: floodplain cutworm, greasy cutworm and overflow worm. Black cutworms have numerous plant hosts and may cause economic damage to seedling plants of corn, cotton, soybeans, turf grasses, vegetables (e.g., lettuce and tomato), wheat and other cultivated and wild plant species.

Although black cutworm moths can be found in Missouri for 10 months of the year, infestations during early spring months most likely originate from moths migrating northward from the Gulf Coast or Mexico. MU and Iowa State scientists have released marked moths in the spring from overwintering sites in Louisiana and Texas and recaptured them three to four days later in the central Corn Belt.

Adult moths are easily identified by the single, black, daggerlike mark on each forewing (Figure 1). Once the female moth has mated she may lay more than 1,000 yellowish-white eggs (singly or in clusters of 30 or less). Egg laying initially occurs during warm nights of late March and into April. The eggs are generally laid in low, wet areas of the field within thick stands of plants and close to the ground. Depending on the temperature, larvae hatch within three to 16 days. Black cutworm larvae have rough, grainy skin that ranges from light gray to black (Figure 2). The larvae go through six to seven stages (instars) and reach a maximum length of 1.5 to 2 inches. When disturbed the larvae will curl into a "C" shape and play dead until the danger has passed (Figure 3). This insect requires 35 to 50 days to complete a generation (egg to adult). 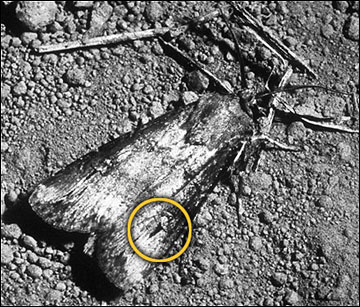 Figure 3
Black cutworm larvae curl into a characteristic "C" shape when disturbed and play dead until the danger passes.

Stand loss from stem cutting is the most severe damage caused by black cutworm larvae. First-generation larvae cause the most crop damage in Missouri, but later planted crops may be susceptible to damage by second generation larvae. Cool temperatures and moist soil conditions can slow a plant's growth and prolong its susceptibility to black cutworm feeding damage. As larvae increase in size, they become more destructive and may cut several plants in a single night. Plants may be cut above or below the soil surface (Figures 3 and 4). When soil conditions are dry, cutworm larvae frequently drag cut plants into their burrows. 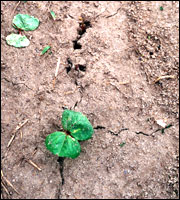 Figure 4
Black cutworm damage to cotton. Note the cut seedling near the larva burrows in the row of cotton plants.

In corn, small cutworm larvae (third or smaller instars) also cause "shothole" feeding damage on the tender leaves of seedling plants. Older larvae may tunnel into the growing stalk and cause wilting ("dead heart") later in the season (Figure 5).

Always read and understand the label before using any pesticide.

In cotton, black cutworm larvae may feed on foliage, roots and stems; however, the most severe damage is stand loss from cut plants.

In soybeans, larvae cut seedling plants below the cotyledon leaves. Even though it is an unusual pest in soybeans, infestations typically occur when cutworms are abundant also in corn.

In Missouri and Iowa, several years of research indicate that if cutworm damage occurs, it is due to larvae that were already present in the field at the time of planting; therefore, it is important to begin scouting at plant emergence.

Black cutworm larvae are difficult to detect because they are active mainly at night and hide beneath dirt clods, in soil cracks or in their burrows during the day. Examine 25 consecutive plants at each of 10 widely distributed areas in a field to determine cutting damage, larval size and feeding locations on the plant. It is helpful to dig around cut plants and underneath dirt clods to locate the larvae. Scouting in corn should continue until plants reach the 4- to 5-leaf stage; in other crops scouting should continue for at least two weeks after emergence.

Corn
Because the level of yield reduction is related to the site of injury on the seedling plants, different corn thresholds exist for damage above and below ground. Rescue insecticide treatments are recommended when 2 to 4 percent of the corn seedlings are cut below ground and 6 to 8 percent of the seedlings are fed upon or cut above ground. The smaller percent figure is for lower plant populations (15,000 to 20,000 per acre); whereas, the larger figure is for higher plant populations (22,000 or more per acre).

Cotton
The recommended threshold for rescue spot treatments in cotton is when plant stand counts are reduced to below three plants per row foot and live larvae are present. Cutworm infestations should be reported as a percentage of plants cut: light (1 to 5 percent), medium (5 to 15 percent), or heavy (more than 15 percent) when plant damage and significant stand reduction occur.

Soybeans
The recommended threshold for treating soybean fields is when 20 percent of the plants are cut, plant stand gaps are greater than 12 inches, and live larvae are present.

Black cutworms and other cutworm species are a challenge to manage, especially under dry field conditions. The following practices may prove helpful in minimizing cutworm damage. 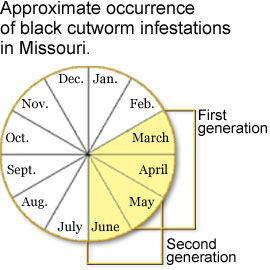 Whether or not to replant a field that has been heavily damaged by black cutworms can be a tricky decision. Stand reductions of greater than 20 percent are a general baseline. Date of the original planting and percent stand loss also should factor into this decision. Later planting dates necessitate higher stand losses to offset the lower yield potential of replanted crops since the growing season is shorter. It is recommended to wait seven to 14 days after the original stand is destroyed before replanting when insecticides are not applied. This delay will provide time for the larvae to mature and pupate (nonfeeding stage).

The authors wish to thank Armon J. Keaster (MU Emeritus Professor of Entomology) and Maureen O'Day (MU) for earlier comments, contributions, and suggestions on this publication. We also wish to acknowledge Keaster's many decades of service to MU and Missouri crop producers for his research contributions on black cutworm migration patterns, sampling practices, and management techniques.