Mulches provide many benefits to plants. Benefits vary with the material used, the type of soil, the kind of plant and the cultural practices used. Mulches also may be used to make landscapes more attractive and usable and to reduce the amount of maintenance work (Figures 1a to 1c). 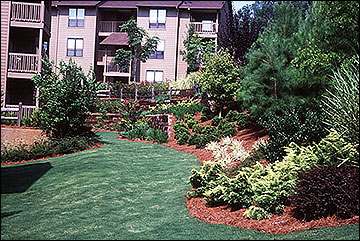 Figure 1a
Mulch beds can provide a unifying effect in the landscape. 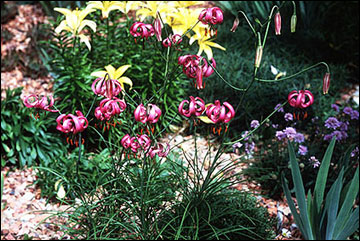 Figure 1b
Mulch beds keep the soil cooler in summer and warmer in winter, an important benefit for flowering bulbs. 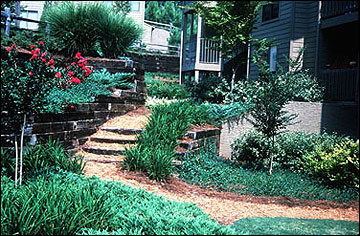 Figure 1c
Mulch can also make an attractive walkway through the landscape.

Figure 2
One use for an inorganic mulch, such as gravel, is in a rock garden.

Table 1
Relative value of mulches that break down in one season or less.

Many types of material, organic and inorganic, may be used as mulch. Organic mulches may break down in one season or less or persist for more than one season. The first type is used mainly in vegetable and flower gardens or around newly planted trees and shrubs. They are usually decomposed enough by the end of the growing season that they can be spaded or plowed under, increasing the organic matter content of the soil and thereby improving soil structure. Even if not incorporated, mulch improves the soil as worms and soil microbes move it into the soil. Some common mulches of this type are listed in Table 1.

Organic mulches that persist for more than one growing season are more useful around permanent plants. These are summarized in Table 2.

Inorganic mulches may be gravel, crushed stone or some manufactured product (Figure 2). Most of these materials are not as beneficial to plants as the organic mulches are because they do not improve the structure or nutrient content of the soil. Black plastic mulch is not recommended for use in the landscape but may be useful in the vegetable garden. Spun-bonded or woven landscape fabrics (geotextiles) are better suited for landscape purposes. Normally these fabrics are covered with a more decorative mulch rather than used alone. However, soil structure may deteriorate under geotextiles, because the organic mulch above it cannot enter the soil. Some commonly used inorganic mulches are summarized in Table 3.

Though not generally considered mulches, some low-growing groundcover plants produce many of the same benefits as mulch. They shade the soil surface, keeping it cool in summer and at the same time preventing evaporation. For more information on groundcovers, see G6835, Selected Groundcovers for Missouri. 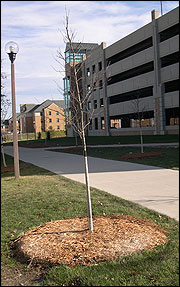 Figure 3
Newly planted trees benefit greatly from a ring of mulch around the base of the tree.

On the whole, mulches should not be considered a fertilizer. Most of them release some nutrients as they decompose, but the fertilizer value is very small in relation to the physical effects. Where mulches are needed, use them for the mulch value and add fertilizer as a supplement.

The effectiveness of a mulch depends on the density and texture of the material used and the depth of the layer applied. A 2- to 4-inch layer of most products is needed to insulate the soil effectively and prevent weed growth.

Considering the growth requirements of the multitude of garden and landscape plants, obviously there is no one mulch that will be superior in all cases. The following general suggestions should help in selecting the right mulch.

Among garden bulbs, lilies benefit more from mulching than any other group. Two to 3 inches of wood shavings, straw, chopped hay or other lightweight material serve to lower the temperature of the soil in summer, conserve moisture and give winter protection to the more tender species.

Most other bulbs are sufficiently winter hardy but benefit from mulching for other reasons. Small, shallow-planted bulbs can be heaved out of the soil by alternate freezing and thawing. This effect can be largely prevented by light mulching. Mulches generally improve the appearance of flowering bulbs growing in a bed of otherwise barren soil. They offer a background for viewing the new spring growth and also reduce the spattering of plants with mud during rainstorms.

Plants that most need mulching are evergreen shrubs and young evergreen trees, especially the broad-leaved types. Mulches help prevent winter drying of these plants. Winter drying causes foliage to become scorched and discolored over winter and may cause the plant to die. Drying develops when foliage loses moisture faster than it can be taken up by the roots from a dry or frozen soil.

Plants that should almost always be mulched are azalea, boxwood, Chinese and Japanese hollies, Japanese andromeda and rhododendron. Exotic evergreens and those planted north of their best zone of adaptation should be kept well mulched year-round.

Coarse mulches should be used: wood chips, bark products, shavings, chopped corn cobs, pine needles, hedge trimmings or partially finished coarse compost. Mulches should be renewed in early winter. A layer 2 to 4 inches deep is adequate in most cases but can be more or less, depending upon site, soil, climatic zone and the plant itself. The mulched area should be at least as broad as the plant itself and preferably broader since most woody plants have root systems that reach beyond the spread of the branches.

To keep young fruit trees growing well, maintain a mulched area 3 to 4 feet in radius around the base. Coarse materials such as hay, straw, wood or bark products are most useful. Keep mulch pulled away from the trunk of the tree. The mulch can be replenished in late March or early April before new weed growth appears. Grapes and berry bushes may be kept permanently mulched.

Strawberries should be mulched preferably with clean straw or with prairie hay in mid-December. Use enough mulch, loosely scattered, to barely hide the foliage. In spring when new leaves begin to grow, remove enough of the mulch to allow the plants to emerge.

Some perennials that are normally cold hardy are often damaged by alternate freezing and thawing of the soil, which may loosen or heave the plants and expose them to drying. Among these are aconite, coral bells and newly planted peony and plantain lily.

A few plants are extremely sensitive to damage by high summer soil temperatures or drought. Delphinium, lupine, primrose and Siberian iris are among the most troublesome in this respect.

Two to 3 inches of straw, hay, wood shavings or partially composted leaves would be an appropriate mulch for most perennials. Pine needles or evergreen boughs are also effective. When using a heavy layer of mulch on perennials, gradually remove it during the onset of warmer weather in late winter. Heavy mulch left too long may cause early emergence of weak, tender growth. Such growth may be killed or permanently injured by late freezes.

Experienced rose growers recognize the improvement in vigor and appearance of roses as a result of summer mulching. The mulch layer should be about 2 inches deep and of fairly coarse material such as unfinished compost, aged sawdust, bark, milled wood fiber or tobacco stems.

By mid-November, provide adequate winter protection with a mound of finished compost, garden soil or coarse peat. The mound should be about 8 inches deep across the center of the plant. Mounds should be removed in early spring when overnight temperatures below about 28 degrees Fahrenheit are no longer expected. If later, unseasonably cold weather threatens and new, tender shoots have begun to grow, hasty covering may be needed.

Figure 4
Trees and shrubs can be grouped in mulched beds.

Trees and shrubs that gain most from mulching are new plantings, ones with shallow roots, and ones that suffer from extended drought or are otherwise damaged by high soil temperatures (Figure 4). Flowering dogwood and sugar maple are examples of plants whose leaves scorch easily in dry weather. Some leaves of birches, willow and tulip trees often yellow and drop during extended drought.

The material used for mulching is perhaps less important than the simple fact that the plants are mulched. Most coarse materials are satisfactory. Avoid materials such as sawdust, which packs tightly, and those too unsightly in the landscape. Planting groups of trees and shrubs together in mulched beds is efficient and simulates natural conditions for most species (Figure 4).

The primary reason for mulching vegetable and flower gardens is to conserve soil moisture. Crops most practical to mulch are beans, peppers, sweet corn, tomatoes, vine crops and other long-term summer crops with large amounts of foliage. Long-term crops started in the cool season, including broccoli, cabbage, cauliflower and potatoes, will also yield better when they are mulched. Asparagus and rhubarb should be kept constantly mulched to conserve soil moisture and reduce weed problems.

Some of the best mulches for annual vegetable crops are composts, straw, hay or other materials that will be largely decomposed at the end of the season.