The most highly prized landscape plants are broad-leaved evergreens. They are the true aristocrats of our gardens. However, many of them require special attention if they are to develop into attractive, long-lived plants.

Wide fluctuations in temperature, prolonged dry periods, drying winds and bright sunshine of the Midwest are not ideal conditions for most broad-leaved evergreens. Special soil preparation and a carefully selected location are usually necessary to ensure the success of these plants. However, the year-round beauty and special effect they give to the landscape makes them well worth the effort.

The broad-leaved evergreens are valued chiefly for their evergreen foliage, but many of them possess other desirable ornamental traits (Figure 1). They are generally clean plants, dropping few leaves at any one time, and they never become overgrown and weedy as some other ornamentals do. In addition, most of them are relatively free from insect and disease problems.

Broad-leaved evergreens subject to winter injury should be located where they will receive protection from the wind and afternoon sun, especially in winter. North and east sides of buildings are ideal. Wind and sun protection provided by fences or large plants also helps prevent injury.

Fertilize broad-leaved evergreens only in spring. Summer or fall fertilization may induce late-season growth that is highly susceptible to winter injury. Winter scorch of foliage can also develop if plants dry out over winter. To prevent winter scorch, water plants in late summer and fall if rainfall has been deficient.

Size and age of a plant are also important to winter hardiness of some species. A small, young plant may be easily killed, whereas a larger, older plant of the same species is quite hardy.

Poor culture, attacks by insects or disease, or any other factor that weakens a plant makes it more subject to winter injury. 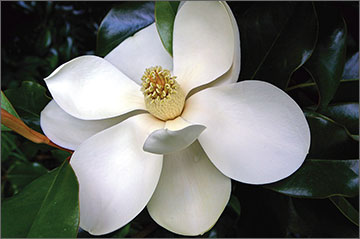 Figure 1
Southern magnolia is one of many broad-leaved evergreens popular in Missouri. Photo courtesy of the Mizzou Botanic Garden.

Many plants described in the following section are not hardy in all parts of Missouri. The zones where a plant can be most reliably grown are listed with each plant. These plant-hardiness zones correspond to those shown on the map in Figure 2. They are based on the average annual minimum winter temperature taken from long-term weather records. Soil type, rainfall and summer temperature also affect winter hardiness. Therefore, these zones are only a rough estimate of a plant's ability to grow in a particular area. 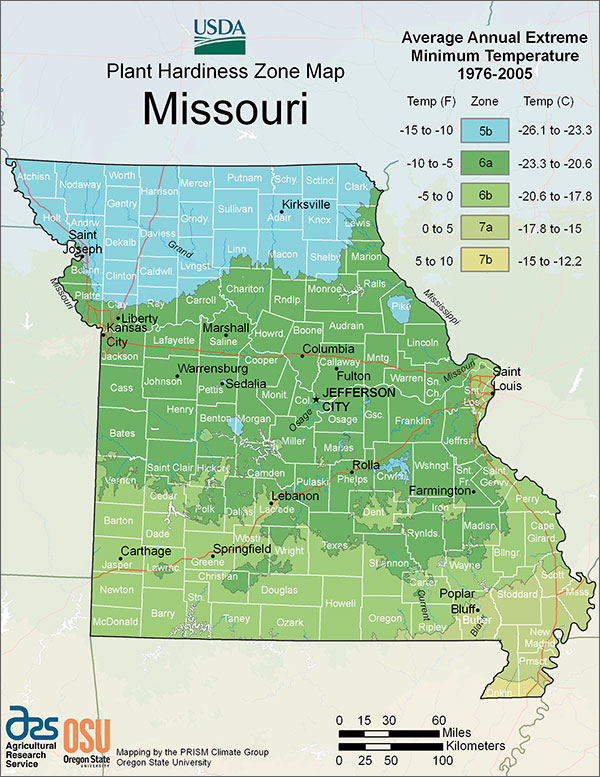 Glossy abelia may grow to a height of 5 feet in southern areas, but it is smaller when grown in colder climates. It is valued for its small pink flowers that appear from June to frost. Abelia may be used as a specimen plant or as a small hedge. The glossy foliage appears in late spring.

In winter, foliage turns purple, and the plant may lose some foliage if winter is severe. Pruning of dead twigs is often necessary in late spring after growth starts. In severe winters, tops may be killed back, but new shoots develop rapidly from the base.

The plants commonly called azaleas and those called rhododendrons belong to the botanical genus Rhododendron (Figure 3). It is the largest group of woody ornamental plants in the world. More than 2,000 species, varieties, cultivars and hybrids have been recognized. There is no clear-cut distinction between the group known as azalea and the one called rhododendron.

Special soil conditions and cultural requirements are needed to grow azaleas and rhododendrons. Because of these needs and the many species and cultivars available, they cannot be covered adequately here. For details of their culture and selection, see MU Extension publication G6825, Growing Azaleas and Rhododendrons. 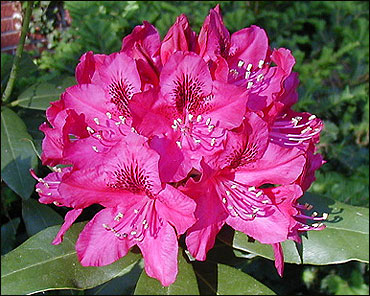 Figure 3
Rhododendron catawbiense, 'Nova Zembla,' is one of the hardiest evergreen rhododendrons.

Wintergreen barberry, an excellent small shrub, is attractive in the garden throughout the year. The evergreen foliage is 3 inches long, narrow and spiny. The thorny twigs make it an excellent barrier and hedge plant. Small yellow flowers appear in May. Bluish-black berries add interest in the fall. Wintergreen barberry is very hardy and easily grown.

Boxwood has been a popular broad-leaved evergreen, particularly in the eastern and southern United States, where very old specimens can be found. Boxwoods make excellent specimen plants or hedges. They can be easily pruned to any desired shape. Of the available boxwood types, the Korean boxwood is most hardy and easily grown. The leaves, however, tend to lose their color in winter. In shady locations the winter discoloring is less severe. The common boxwood is suitable only for southeastern Missouri. 'Wintergreen,' a selection of Korean boxwood, is a popular cultivar that holds its color well over winter. Several recently introduced hybrids between littleleaf and common boxwood, such as 'Green Mound,' 'Green Gem' and 'Green Velvet,' have performed well in Missouri's climate.

Spreading euonymus is also known as Euonymus patens. It is evergreen in the south, but in colder areas leaves may turn brown in late winter and hang onto the plant until new leaves are produced in the spring. It grows well in full sun, but the leaves remain green longer if it gets winter shade. The fruit capsules open in the fall to reveal the bright reddish seed.

Oregon grapeholly is a fairly coarse, stiff shrub that may grow as tall as 6 feet. In April the plant is covered with bright yellow flowers. In the summer, the bluish-black grapelike fruits develop. The foliage is dark, lustrous and hollylike. In winter, the leaves turn a bronze-purple color. This shrub is usually semi­evergreen and much of the foliage does not persist through the winter. Protection from winter sun and wind will help it remain more attractive during the winter.

Creeping mahonia is a low-growing shrub with leaves, flowers and fruit similar to Oregon grapeholly, but growing only about 18 inches tall. It spreads by underground stolons, making it useful as a tall, low-maintenance groundcover. Like Oregon grapeholly, creeping mahonia may suffer some dieback during severe winters, but it responds well to pruning out of the dead tips.

The spiny, evergreen leaves and bright red berries of American holly are familiar to most people. American holly is native in southeastern Missouri. It is slow growing and in other areas of the state should be used as a large shrub, although it will eventually develop into a small tree.

Acid soils high in organic matter and with good drainage are essential for growing hollies.

The Chinese holly produces large, spiny, glossy green leaves and bright red berries. It is one of the few hollies that does not require pollination to produce berries. Therefore, there is no reason to plant the male forms. Chinese holly is very popular where it can be grown, but is reliably hardy only in the warmer areas of Missouri. The most commonly grown cultivars of Chinese holly include

Most Japanese hollies produce small, spineless leaves and black fruit. They are popular, small, compact evergreen shrubs. Some of the most commonly grown of the many available cultivars include

Narrow evergreen leaves and a dense branching habit makes fosters holly an excellent specimen or accent plant when sheared. It may be used unsheared in screen plantings but becomes more loose and open. It is heavily berried and does not need a male plant nearby to produce fruit.

The Blue series of Meserve hollies — including 'Blue Girl,' 'Blue Maid,' 'Blue Princess' and 'Blue Prince' (Figure 4) — is known for cold hardiness. Certain other Meserve hybrids, such as 'China Boy' and 'China Girl,' are reported to be more cold and heat tolerant than the Blue series. 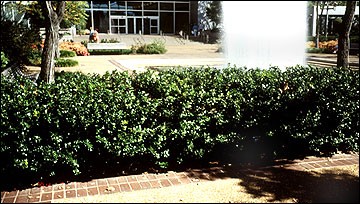 Figure 4
'Blue Prince' holly will grow 8 to 12 feet high but can be pruned into any shape.

The inkberry, a native black-fruited holly, is not as attractive an ornamental as the other hollies, but it is one of the most hardy of the group (Figure 5). Leaf size, shape and glossiness vary considerably. The selection 'Compacta' should be used in the landscape. Occasional pruning will keep the plant from developing loose, open growth. 'Nordic' and 'Shamrock' are dwarf selections of inkberry that work well in 3- to 5-foot-tall hedges or for massing. 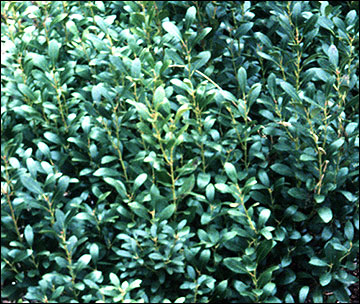 Figure 5
Inkberry is among the hardiest of the hollies.

This slow-growing plant with spreading, arching branches and dark lustrous leaves produces fragrant, bell-shaped flowers in early spring. Drooping leucothoe needs shade for best growth and therefore is most suitable beneath large evergreens. It is related to Japanese andromeda and requires the same growing conditions.

The large, lustrous evergreen foliage of the southern magnolia makes it a very desirable ornamental. It develops into a large tree in southeastern Missouri, but in the St. Louis area, about its northern limit, it rarely gets over 20 feet tall. Its large white flowers are produced abundantly in southern areas but only occasionally in colder climates.

Southern magnolia needs to be planted in a well-protected spot to survive without injury in any but the warmest parts of the state. Wind protection is essential as the large leaves are easily damaged by winter winds.

The reedlike stems with the evergreen leaves clustered at the tip give nandina an exotic bamboolike appearance. It is best known for its clusters of bright red fruit in the fall. It is a highly ornamental plant, but unfortunately it will only develop properly and fruit in the warmest parts of the state. In colder areas, plants are often killed back to ground level but usually sprout from the roots in spring.

An attractive, broad-leaved evergreen, Japanese pieris may reach 5 feet but is usually smaller in Missouri's climate. The new foliage is bronze-colored in spring, soon turning a lustrous medium green. The flowers, borne in late March, are a creamy white in long, drooping clusters. This broad-leaved evergreen needs protection from winter sun and wind to prevent leaf scorch and killing of the flower buds. A light, well-drained acid soil high in organic matter will produce the best plants.

Pyracantha is a semievergreen shrub. It produces showy, small white flowers in the spring, but the clusters of bright orange berries it produces in the fall that hang on the plant until midwinter are its main attraction. Pyracantha can be grown as an individual specimen plant, as a hedge or barrier, or it can be trained flat against a wall to look like a vine. It normally grows to 6 or 7 feet tall and can spread to almost twice that width, so ample space must be given for the plant to develop. Dwarf varieties are available for smaller areas. Pyra­cantha is one of the few plants that seem to do best on poor soil. Good soil and high fertility produces rampant growth that is susceptible to disease and low in berry production.

Leatherleaf viburnum is a coarse-textured shrub that may eventually grow 10 to 15 feet tall and wide. Its large wrinkled leaves persist well during cold weather. In late winter, leaves turn yellowish and drop off as new foliage emerges in spring. Leaves are up to 6 inches long. The flat clusters of white flowers are not as showy as the red to black berries that follow.

Leatherleaf viburnum prefers a well-drained soil with protection from afternoon sun, especially in winter. This shrub is often used in corner plantings or for accent in a shrub border. It is suitable for planting beneath pines or other large evergreen trees. 'Alle­ghany' and 'Willowwood' are hybrids made by crossing leatherleaf viburnum (Viburnum rhytidophyllum) with wayfaringtree viburnum (V. lantana). These are evergreen or semievergreen in Missouri and are considered by many to be more ornamental than leatherleaf itself.