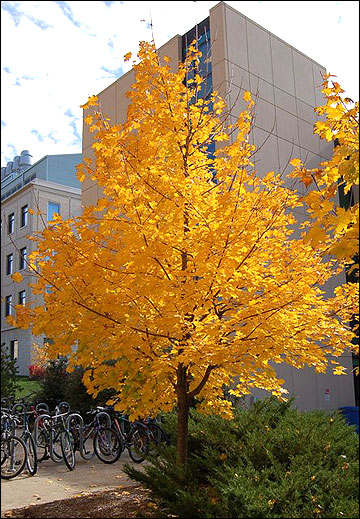 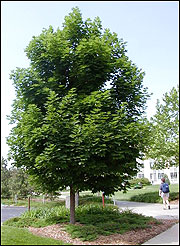 As its name implies, the Norway maple is a native of Europe, but it has been widely planted over the eastern United States. Most of the varieties of maple with unusual shape or foliage color have been derived from this species. They include such popular varieties as 'Schwedler,' which has purple leaves in early spring that change to dark green color; 'Crimson King,' with purple leaves that retain their color all summer; 'Columnare,' only one of several varieties with a narrow columnar habit of growth; 'Globosum,' a low-growing, round-headed tree that can be grown under utility wires; and 'Summershade,' a rapid-growing, heat-resistant variety with an upright growing habit. Many other varieties of Norway maple have been selected and named. Because a name does not appear in Table 1 does not mean that it is not as good as the ones listed. Ask nursery personnel for advice on the varieties not listed.

The dense shade and shallow root system make it almost impossible to grow anything under a Norway maple. Its yellow flowers in early spring are interesting but not especially ornamental. It certainly has merit for planting in areas where you don't care if you can grow anything in its shade or not.