Take-all is a disease of the roots, crown, and stem base of wheat. It interrupts plant development and may seriously suppress yields. A common problem of winter wheat in North America, Take-all occurs in Missouri especially under cool, damp conditions. The name originated in Australia in the middle of the last century when the disease "took all" seedlings it attacked. In Missouri the disease seldom affects seedlings but more commonly attacks wheat plants at the tillering stage.

Yield losses to this disease in Missouri vary yearly depending on environmental conditions. Light to moderate damage may often go undetected. If soil and weather conditions favor the disease, severe root and crown rot develop, and yields may drop more than 50 percent.

Most plants withstand mild root infections and appear symptomless. Severely infected plants are stunted and ripen prematurely. Take-all symptoms are most obvious near heading, when plants appear uneven in height (Figure 1), begin to die prematurely, and exhibit white heads (Figure 2). Infected plants may be stunted, mildly off color (yellow) and have fewer tillers. When tillers are killed prematurely, their heads are distinctly bleached (white-headed) and sterile. Diseased plants are easily pulled up or break off near the soil line because of root rot. On close examination, their roots appear sparse, blackened, and brittle (Figure 3). 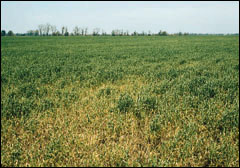 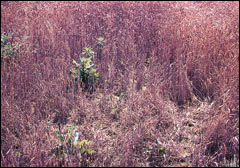 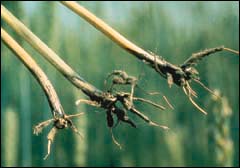 Symptoms may be limited to blackened roots if soil moisture is low early in the development of the crop. If there is sufficient soil moisture throughout the growing season, the black-brown rot may extend into the crown and up the stem base, where a superficial, dark, shiny layer of the fungus surrounds the stem beneath the lowest leaf sheath. Diseased stems weakened at their base may occasionally lodge, or lie flat on the ground. Although these symptoms are often the first obvious indications of Take-all, they are the terminal stages of the disease.

The Take-all fungus survives from year to year on the undecomposed root and crown residue of infected plants. It can be spread from area to area in this debris. Healthy plant roots become infected as they grow through soil near infected wheat debris. Infection occurs when the fungus penetrates the young roots of a living plant. Infection occurs throughout the growing season but is more severe when the temperature is between 54 degrees and 64 degrees Fahrenheit. Damage is usually greater when plants are infected in the autumn or early spring. Damage may not be visible when plants are infected in late spring rather than early spring.

Take-all severity on wheat depends on the supply of nutrients to the host. It is important, therefore, to maintain good levels of available nitrogen, phosphorus, potassium and magnesium.

Soil pH affects the development of this disease. Disease damage is usually worse as the soil pH approaches 7.0. Thus, applications of lime and nitrate fertilizers (that raise the pH around plant roots) generally increase the severity of Take-all. Ammoniacal and slow-release forms of nitrogen are less favorable for disease development. Also, the severity of Take-all seems less when nitrogen is applied in the spring than in the fall.

The sudden development of whiteheads after a period of hot, dry whether gives the impression that the disease develops late in the season and is favored by hot, dry conditions. However, root and stem damage occurs much earlier, and hot, dry weather serves only to accelerate ripening and water stress. The pathogen rapidly becomes inactive at any stage in the disease cycle during dry weather.

Wheat varieties highly resistant to Take-all are not available. Thus, other disease control techniques must be used.

Rotate crops so a field is out of wheat for one to three years and in a crop that is not infected, such as corn, forage legumes, milo, oats, or soybean. This is usually sufficient for disease control. The fungus needs a host, such as wheat, to thrive on and will die without it. Double cropping wheat and soybean is not a useful rotation for Take-all control. In this situation, the disease develops on the wheat. In problem fields, do not plant wheat as a winter cover crop. The fungus can infect the winter wheat cover crop and thus remain in the soil.

Maintain optimum soil fertility to help reduce the severity of the disease. Adequate nitrogen, phosphorus, potassium and magnesium are needed to promote root and plant growth.

Other management techniques that may be useful include:

The disease is not reduced by burning wheat stubble. Reports on the benefits of seed treatment with Baytan for Take-all contol have been variable.