Prevention and Control of Damage From Wind Erosion in Cotton

Wind erosion and the damage it causes can affect cotton producers through reduced yields due to crop injury, the cost of replanting and the gradual loss of soil productivity. In extreme cases, blowing sand can reduce visibility and cause traffic hazards on roadways in affected areas.

Wind erosion is common on loose, granular soils where large areas are unprotected. The motion and transport of sand particles in the wind depend on the size of the particles and on airflow. Soil particles that are lifted by the airflow and fall back again bounce along the soil surface in a process called saltation. Soil aggregates and larger particles that cannot be picked up by the wind tend to roll along the surface, pushed by the wind and the impact of other particles. This process is referred to as surface creep. Smaller grains that are held in suspension in the air may remain airborne and travel large distances before being washed from the air by rain.

Although dislodged soil particles cause the majority of wind-related damage to vulnerable emerging plants, wind and cool temperatures can also cause desiccation. Blowing sand can open wounds in the plant tissue, which allows entry of disease organisms. Sand particles can also carry herbicide residue directly into the plant tissue. Plants that survive may be stunted and will have delayed maturity.

Although wind erosion is common in Missouri's cotton-growing region, the damage it causes can be controlled or prevented. Recommended strategies for reducing the effects of wind erosion include use of shrub and tree windbreaks, barrier strips of small grains or switchgrass, conservation tillage, small grain cover crops, and mechanical control with an implement such as the West Texas sandfighter.

The large tree and shrub windbreaks that have been a part of the solution for southeast Missouri cotton producers are being removed and are not being replaced. This change is due to the introduction of center-pivot irrigation, expansion of the area needed to maneuver large agricultural implements, the cost of establishing windbreaks, and the time needed for the trees to grow tall enough to prevent damage. However, producers are urged to use these windbreaks where feasible.

Barrier strips of small grains, switchgrass or some other type of tall vegetation (Figure 1) can be effective in reducing the wind flow over a field. Barrier strips several rows wide should be planted parallel to the crop rows and should be spaced close enough to protect the cotton. Generally, a distance of ten times the height of the strip will provide adequate control. The strips are most effective when they are oriented perpendicular to the prevailing wind. The advantage of this control method is that the strips remain in place from year to year and prevent erosion even when no crop is present. The disadvantage is that barrier strips use a portion of land that could otherwise be planted to a crop. This method of sand control is especially popular when the government farm program allows the strip to be used for set-aside acres. 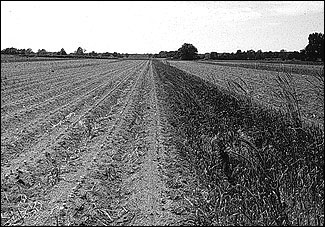 Conservation tillage is one of the best methods for preventing damage from wind erosion. No-till, ridge-till, slot-till, and other tillage systems that minimize disturbance of the soil during field preparation and planting are proven techniques for controlling wind erosion.

A more recent method of preventing wind erosion and damage is to plant a cover crop in the fall (Figure 2). Wheat or rye is commonly used. Rye is lower priced but it is more difficult to kill in the spring before planting cotton. The cover can be planted solid or in one or two rows in the furrow, leaving the beds bare. The advantage to planting in the furrow is that in the spring the beds are clean and the cover crop stubble will not interfere with planting. A solid-planted cover crop must be removed from the tops of the beds before planting unless a herbicide-resistant cotton variety is planted. 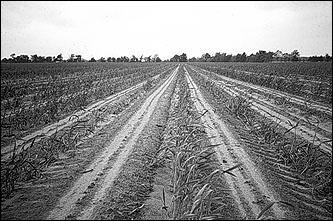 Figure 2
A small grain used as a cover crop for cotton can be planted solid or in furrows.

The cover crop can be killed before cotton is planted or before it emerges. If a Roundup Ready variety is used, Roundup can be used after emergence to kill the cover crop. If the cover crop is only in the furrows, a hooded sprayer may be used. If killed too early, the cover crop may not provide enough vegetative mass to protect the cotton seedlings. Many producers kill a wheat cover crop after booting but before the seed matures. A cover crop can remove much-needed water and nutrients from the soil if it is allowed to grow too long into the cotton growing season. Cover crops allow for the maximum amount of plant protection.

Producers are sometimes concerned that the use of small grains as cover crops will allow the buildup of thrips. An in-furrow or seed-applied insecticide should be used for thrips control when the cotton is planted.

A final method of reducing the effects of wind erosion is mechanical. The use of an implement such as the West Texas sandfighter (Figure 3) has been successful in avoiding replanting in Texas and Oklahoma for nearly 50 years. Flat steel spikes projecting from a rotating shaft make divots in the soil similar to those formed by a rotary hoe except that they are larger and farther apart. Divots approximately two inches deep and two inches wide will be placed several inches apart. 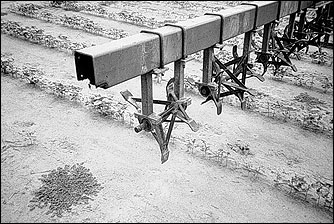 Figure 3
A West Texas sandfighter can cover as much as an acre per hour. A sandfighter makes divots several inches apart in the soil surface but leaves the area between the divots intact.

Sandfighters are large pieces of equipment, taking 12 to 25 rows in a pass. With a tractor running at 15 miles per hour or faster, the machine can cover as much as an acre per minute. A rotary hoe or cultivator can be used to stop blowing sand, but it requires dryer ground than a sandfighter does. A rotary hoe in sandy soil can pulverize the crust and actually increase the problem of wind erosion. The sandfighter can cover the ground much faster because of its greater speed and width. The disadvantage of a sandfighter is that a small portion of the crop is lost, just as when a rotary hoe is used. The sandfighter must be run after every rain of half an inch or more until the crop is old enough to be safe from blowing sand. Sometimes it can be run as early as the day following a rain. It is best to start on the side of the field closest to the prevailing wind. If the sand is already blowing, cover alternate strips the width of the sandfighter; the omitted strips can be finished before leaving the field.

The effects of the wind erosion are easily reduced using these strategies. It is easier to prevent wind erosion effects than to start control after the wind starts blowing. Before using cover crops in conjunction with conservation tillage, producers should check with their local soil and water conservation districts. Cost-share arrangements for some of the practices involving cover crops may be available under the Environmental Quality Incentive Program (EQIP) or other government programs.