Researchers at the University of Missouri recently evaluated a new protocol for synchronization of estrus among postpartum beef cows. This protocol was found to be highly effective both for cows receiving embryo transfer (ET) and cows receiving fixed-time artificial insemination (AI). Extensive field trials with the 7 & 7 Synch observed improvements in the proportion of cows expressing estrus and in the proportion of cows becoming pregnant to embryo transfer or to AI.

Estrus synchronization is a widely applicable reproductive technology that allows producers to improve economic returns and reproductive performance in their operations. A highly synchronous period of estrus expression allows for effective use of other technologies, such as sex-sorted semen and embryo transfer. Many short-term protocols for control of the bovine estrous cycle reply upon an initial administration of exogenous gonadotropin-releasing hormone (GnRH). However, when evaluated among cows with no prior synchronization of the estrous cycle, administration of GnRH at a random stage of the estrous cycle has been observed to induce ovulation only in approximately 66% of cows. The remainder of cows often are in a stage of the estrous cycle in which the developing follicle simply does not yet have the capacity to respond to GnRH. This presents a challenge for effective control of the estrous cycle, as this variation among cows can result in reduced proportions of cows expressing estrus, reduced pregnancy rates, and even potentially greater rates of embryonic loss.

Researchers at the University of Missouri have extensively evaluated a new estrus synchronization protocol, 7 & 7 Synch, as an improved method to synchronize estrus among postpartum beef cows. Research efforts have included an initial data-intensive pilot project designed to characterize endocrine and ovarian response to the protocol, an extensive field trial evaluating this approach for synchronization among recipients prior to embryo transfer, and an additional extensive field trial evaluating 7 & 7 Synch with fixed-timed AI using both conventional and sex-sorted semen. Results indicate a significant increase in the proportion of cows expressing estrus following synchronization and in the pregnancy rates achieved.

Induction of ovulation with GnRH at the start of a protocol is dependent upon follicular maturity and is therefore frequently unsuccessful due to the absence of a physiologically mature follicle during some stages of the estrous cycle. In cases in which ovulation is successfully induced via administration of GnRH in a standard 7-Day CO-Synch + CIDR protocol, a new or accessory corpus luteum is formed following ovulation and a new ovarian follicular wave is recruited. However, in cases in which ovulation is not successfully induced in a standard 7-Day CO-Synch + CIDR protocol, little control is afforded over the stage of follicular development. This results in varied timing of onset of estrus and ovulation, as well as other challenges stemming from unsuccessful induction of ovulation via GnRH. In contrast, 7 & 7 Synch offers a simple, single-step approach to control stage of cycle in advance of administration of GnRH (Figure 2). By inducing luteolysis and treating with progesterone at a subluteal concentration, follicular atresia is inhibited prior to administration of GnRH and likelihood of an induced ovulation in response to GnRH is increased. This approach affords a greater degree of control over subsequent follicular development and luteal status.

Prior to any large field trials, researchers at the University of Missouri evaluated the effect of treatments in advance of GnRH administered at the start of estrus synchronization (Bonacker et al., 2020a). Administration of PG followed by treatment with an intravaginal progesterone-releasing insert (CIDR) was hypothesized to result in increased follicle size at GnRH, thereby enhancing response to GnRH and overall response to estrus synchronization. With the 7-d CO-Synch + CIDR protocol as a reference, four additional treatments were tested to evaluate the effect of a CIDR insert in place seven days prior to GnRH with or without administration of PG at the start of the CIDR treatment, as well as to evaluate the effect of the CIDR remaining in place following GnRH administration. Blood samples were collected for hormone concentration analysis, ovarian ultrasound was performed to assess ovarian follicle size and presence of corpora lutea, and cows were monitored for onset of estrus using transmitters. Treatment with PG and CIDR in advance of GnRH resulted in significant increases in the diameter of the largest ovarian follicle (P < 0.001) and in serum concentration of estradiol (P < 0.0005) at GnRH administration. Cows that received PG and CIDR treatment prior to GnRH also tended (P < 0.10) to be more likely to have a single CL at CIDR removal and PG, and to express estrus prior to FTAI. 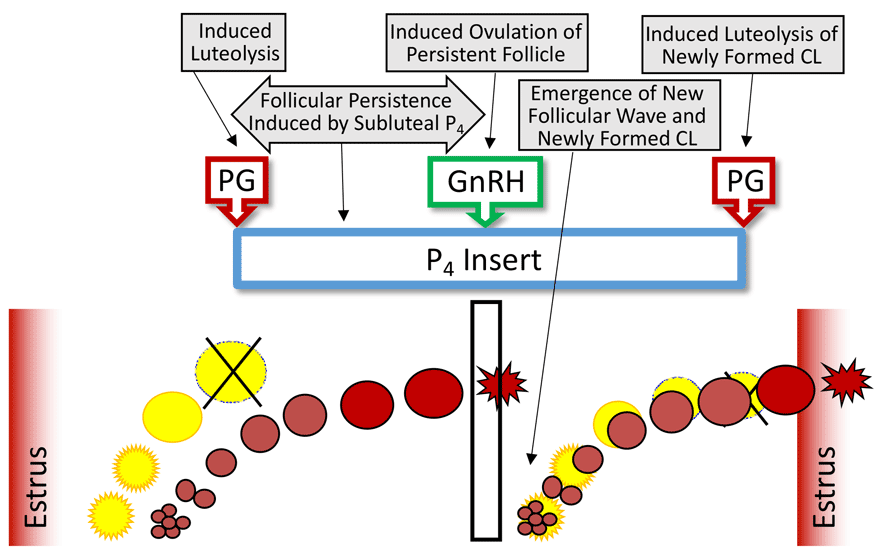 A large-scale field trial was designed and conducted in collaboration with Cross Country Genetics (Westmoreland, KS) to evaluate the effectiveness of the 7 & 7 Synch protocol on producer operations. 7 & 7 Synch was compared to the 7-Day CO-Synch + CIDR protocol to synchronize estrus and ovulation among recipients prior to embryo transfer. The trial took place across thirteen locations in Missouri and Kansas and included over 1,300 postpartum beef cows of varying age, postpartum interval, and body condition scores. The proportion of cows expressing estrus and presenting with palpable CL at embryo transfer was significantly greater (P < 0.001) among cows following treatment with the 7 & 7 Synch protocol (Table 1)..

An additional large-scale field trial was conducted to compare the 7 & 7 Synch and the 7-day CO-Synch + CIDR protocols for synchronization of estrus among postpartum beef cows prior to fixed-time AI. To assess field fertility of both sex-sorted and conventional semen, half of the cows assigned to each protocol received sex-sorted semen (SexedULTRA 4M®) and half received conventional semen. The trial took place in eleven locations across Missouri and South Dakota and included over 1,500 postpartum beef cows of varying ages, postpartum intervals, and body condition scores. 7 & 7 Synch significantly increased the proportion of cows expressing estrus prior to fixed-time AI (Table 2).  Additionally, 7 & 7 Synch resulted in increased pregnancy rates to fixed-time AI when using conventional or sex-sorted semen (Table 3). .

Use of this protocol in virgin beef heifers has not been evaluated in comparison to other commonly used protocols and is not recommended at this time.

Although estrus expression is highly synchronized following administration of the 7 & 7 Synch protocol, to date no experiments have been conducted evaluating the protocol in a fixed-time embryo transfer program.

What if I accidently give GnRH on day 0 instead of PG?

A switch of the initial hormone administration from PG to GnRH would alter response. In this case, producers should likely be advised to follow the treatment schedule of the standard 7-Day CO-Synch + CIDR and adjust the planned AI date accordingly.

Should I use estrus detection aids?

Estrus detection aids (e.g. Estrotect® Breeding Indicators) can aid in important management decisions. Animals that express estrus prior to fixed-time AI have a higher likelihood of becoming pregnant. Costly semen such as sexed semen can be restricted to animals who have expressed estrus, while lower cost semen can be used for non-estrous animals. In addition, GnRH can be given to only those animals who have not yet expressed estrus at the time of fixed-time AI.

Is the extra PG and animal handling worth it?

While this answer is based on each individual operation, the increased pregnancy rates resulting from the 7 & 7 Synch protocol offer an opportunity for increased profitability depending on the value of the early pregnancies obtained. In most cases, the value of early pregnancies as well as the year-to-year improvement in reproductive performance is expected to outweigh the cost of one additional dose of PG and animal handling.