Aquifers and Soil Filter Effect: Nitrogen in the Environment

Groundwater is like a very large, saturated underground sponge made of sands and gravels. Water seeps through this sponge at varying rates, depending on the permeability of the sands or gravel (Figure 1). Water filters down through the soil until it reaches the aquifer. The water table indicates the top level of groundwater, or aquifer.

Aquifers may be present very near the ground surface or more than 1,000 feet down. Factors that affect the potential for contamination of groundwater include:

Groundwater contamination only becomes a problem when chemicals:

How far chemicals leach depends on the type of material and the soil type. Soils such as clay can attract and hold large amounts of chemicals. Chemical materials can be changed through soil microbial and chemical reactions, reducing or eliminating their toxicity. As soils become more porous, like sands, chemicals flow more directly through these soils and may enter a shallow water table. 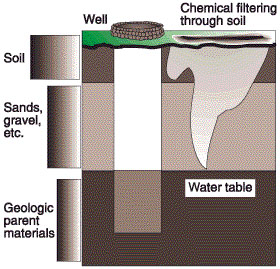