This deer conservation guide is one in a series developed jointly by MU Extension and the Missouri Department of Conservation.

Although landowners frequently want to know how many deer are on their land, knowing exact numbers is not realistic, nor is it necessary for successful deer management. However, having a basic understanding of population dynamics is important, as it can help a landowner identify how and why the population may be increasing or decreasing.

The number of white-tailed deer within a given area is referred to as a population. Dynamics refers to the change in the size and composition of a population over a particular time period.

Knowing whether the population is larger or smaller or whether it includes more does or older bucks over time is more important than knowing the exact number of deer. Determining the population demographics over multiple years and understanding the relationships that influence trends can help a landowner make appropriate decisions to reach management objectives.

The Missouri Department of Conservation (MDC) manages and monitors the statewide deer population and demographic trends over time to maintain populations at levels within the biological and cultural carrying capacity. Deer have historically provided economic, cultural and recreational benefits to Missouri citizens. However, areas with high deer populations may suffer negative impacts, such as more deer-vehicle collisions, greater loss of crops and long-term habitat damage (Figure 1). Deer population dynamics information should be incorporated into management decisions that influence deer populations within an area. 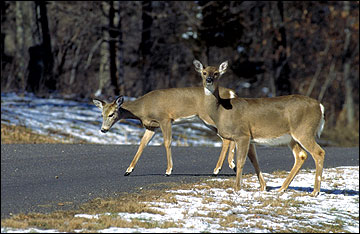 Figure 1. Maintaining a deer population below the cultural carrying capacity is important, especially in urban areas to decrease deer-vehicle collisions.

White-tailed deer populations in Missouri have fluctuated dramatically throughout history. Before European settlement, deer were thought to be abundant in the state. However, market hunting and loss of habitat during the 19th century caused the population to decline.

In the early 1900s, laws regulating deer hunting were passed but were largely unenforced. By 1925, Missouri had an estimated deer population of only 400. This decline led the Missouri Legislature to close deer hunting altogether and strictly enforce regulations to protect and restore the population. The Missouri Department of Conservation (MDC) made efforts to relocate deer to Missouri from Michigan, Wisconsin and Minnesota to help replenish the deer population. Conservation agents began to enforce regulations, which helped deter poaching. By 1944, the deer population had increased to 15,000 and the first deer season (buck-only) was held, with 583 deer harvested.

Pregnancy rates
Research in Missouri suggests that does that breed as yearlings (1-1/2-year-old) or as adults (2-1/2-year-old and older) often produce twins. Reproductive rates are much lower for does that breed as fawns (about 6 to 8 months of age). Studies suggest that pregnancy rates decline as the deer population density increases towards the biological carrying capacity. In areas with quality habitat and abundant food sources, there is often an increase in the pregnancy rate.

Population density can affect the age that deer first breed. Research in Missouri has found that as the deer population density has increased over the past several decades, the percentage of breeding fawns has slowly declined. A greater proportion of doe fawns will breed in areas with quality habitats and lower deer densities.

Sex ratio of offspring
In Missouri, research has shown that the sex ratio of fawns is close to 1-to-1. The ratio is slightly biased towards males, as buck fawns slightly outnumber females at birth.

Deer populations have the potential to grow at fast rates, but this growth is limited by deaths, which occur for a variety of reasons. Studies have shown that the annual mortality of the fawn segment of the population can be as high as 40 percent. Predation and farming activities such as haying and mowing are primary causes of fawn mortality, particularly during their first 2 months of life. Excluding hunting, the annual mortality of 6-month-old and older deer is less than 5 percent in most areas of Missouri. The primary causes of overall deer mortality are hunting, diseases and parasites, predation and deer-vehicle collisions.

Hunting
Hunting is the leading cause of deer mortality in most of the state (Figure 3). Each year, hunters take 40 to 70 percent of the antlered bucks and up to 25 percent of the does within many areas of Missouri. Hunting, therefore, can be thought of as the primary factor governing the deer population size.

Research has shown that hunting mortality of does is the most important factor determining whether a population increases, decreases or remains stable. Because one buck can breed many does, the buck segment of the population can be smaller than the doe segment without affecting reproduction rates.

Models that simulate a deer population under various harvest rates show that harvesting 70 percent of the antlered deer from a herd has little effect on population growth. Harvesting more than 25 percent of the does, however, can cause the population growth to decline. If hunting mortality is eliminated, with other mortality and reproductive factors remaining the same, then a deer population has the potential to increase at a very rapid rate, nearly quadrupling within 10 years. Historical deer harvest trends and effects of recent harvest regulations pertaining to antler-point restrictions have also influenced Missouri’s deer population demographics.

Figure 3. In most of Missouri, hunting is the primary method to control deer populations.

Figure 4. The sex composition of Missouri's deer harvest has changed over time.

Automobile accidents
Deer-vehicle collisions can make up a significant portion of the nonhunting mortality, especially in urban and suburban areas. Many of these accidents occur during dawn, dusk or night, when deer are most active. These accidents increase during deer breeding season, as does deer activity. In urban areas, deer-vehicle collisions are responsible for about 90 percent of doe mortality and 63 percent of buck mortality each year, which is essentially equal to the hunting mortality in rural areas (Figures 5a and 5b). 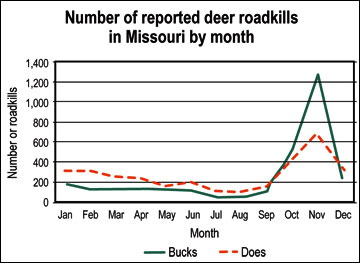 Figure 5a. Deer roadkills increase significantly in the fall, which corresponds to their breeding season. 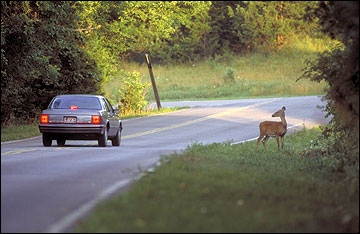 Figure 5b. Does and bucks become more active during the late summer and fall months, increasing chances for deer-vehicle collisions.

Predation
Historically, the main predators of deer were mountain lions and timber wolves. Currently, Missouri does not have breeding populations of those two species. Therefore, the most common predators of white-tailed deer are coyotes and bobcats, which mainly prey on fawns that are 6 months of age or younger (Figure 6).

Figure 6. Bobcats are common predators of white-tailed deer fawns during the first couple months after birth.

Disease and parasites
Deer are susceptible to various diseases, although most of those diseases do not cause high mortality rates. One disease that can cause high mortality rates, as high as 20 to 50 percent, is hemorrhagic disease (HD). HD is a virus that is spread during the late summer or early fall by a biting midge and includes bluetongue (BTV) and epizootic hemorrhagic disease (EHD) viruses. In the southeast United States, HD is a common annual occurrence and mortality is generally low. However, in Missouri HD impacts are more severe and sporadic.

More than 100 internal and external parasites affect deer, but most do not greatly impact the mortality rate. The most common parasites associated with white-tailed deer are arterial worms, nasal bots, lungworms, liver flukes, meningeal worms and ticks. Normally, high deer density areas have greater occurrence of parasites and disease because the deer tend to be nutritionally and socially stressed. For more information, refer to MU Extension publication G9489, Potential Diseases and Parasites of White-tailed Deer in Missouri.

Winter mortality
Winter mortality is not as significant in Missouri as in northern states. However, abnormally severe winters can affect deer mortality rates. When snow is deep, deer expend more energy regulating their body temperature and while traveling. Deep snow also makes finding food difficult. Fawns are the most susceptible to winter mortality because they have lower energy reserves, while requiring higher nutrition and energy levels for body growth.

Other causes
Other causes compose only a small portion of the annual mortality of white-tailed deer. Routine farming practices during the late spring or early summer can cause fawn mortality. Also, brain abscesses, which are primarily found in mature bucks, can lead to mortality.

Deer populations are also influenced by the natural movement of individual animals. Permanent deer movements can be classified as dispersal, immigration or emigration. Deer movement can influence population demographics and cause significant effects in some areas. However, movements are not often considered when managing white-tailed deer because they are difficult to quantify.

Dispersal is the permanent movement of an animal from its birth area to a new home range. White-tailed deer dispersal normally involves yearling bucks leaving the area where they were born to establish a home range in a new area. Research has shown that in agricultural areas bucks may disperse over 20 miles from their birth area. This buck dispersal reduces the probability of inbreeding and explains why managers are unable to control the genetic composition of a population. Does do not normally disperse but tend to stay close to their birth area.

White-tailed deer population growth can be illustrated with a sigmoid growth curve (Figure 7). This curve shows the process of how a deer population will grow over time and incorporates the presence of density-dependent factors, such as disease and competition for food. Population growth occurs in five stages: establishment, increase, inflection, deceleration and maximum sustained density. 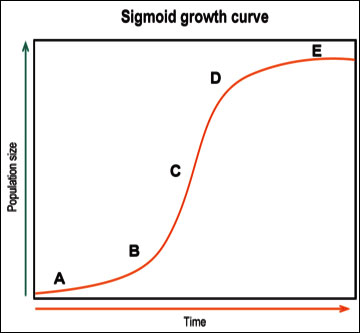 Figure 7. The sigmoid growth curve represents how deer populations can change over time, starting with (A) the establishment stage and proceeding to (B) the increase stage, (C) the inflection stage, (D) the deceleration stage and finally (E) the maximum sustained density stage.

The establishment stage is the initial stage of population growth and occurs when deer are introduced into or repopulate an area. This stage was common in the early 1900s after deer had disappeared from much of Missouri and were then reintroduced. This stage is characterized by slow growth because the population is small. However, survival rates are high and the deer that do breed have higher pregnancy rates.

The increase stage is characterized by a rapidly growing population that maintains high pregnancy and survival rates.

In the inflection stage, annual population growth is at its maximum. The body condition of deer is optimal during this stage. The population has numerous breeding does and high pregnancy and survival rates. To maintain a population at this stage of growth, the harvest must be significant.

At the maximum sustained density stage, the population has reached biological carrying capacity. The biological carrying capacity is not a set number but one that constantly fluctuates due to changes in the environment and habitat. When a population is at this stage for a prolonged time, the habitat can be significantly damaged, which can negatively affect other wildlife species. Although hunters may see more deer, the health and quality of the herd will have been compromised.

Understanding the factors that influence the population dynamics of white-tailed deer is important to achieving management goals and the ability to manipulate deer density. In some circumstances, landowners will need to reduce deer density through regulated hunting on their property; at other times, they may want to increase deer density while manipulating the population’s age and adult sex ratios. Hunting is the primary means of manipulating deer populations in rural areas. Altering deer population demographics requires a large amount of land, as deer have home ranges that encompass several hundred to more than a thousand acres, and therefore may require that landowners work with neighbors to develop common management goals and achieve deer population objectives.