The western cottonmouth is confined to swamps and wetlands in the southeastern part of the state and to the rocky streams and river sloughs in the southern Ozarks (Figure 1). They are active from late April to early October. Females bear eight or nine young in August or September, although the number may range from five to 15. Young cottonmouths are superficially patterned like a copperhead but are not reddish. The tip of the tail is usually yellow. Adults can be 3 to 4 feet long. This heavy-bodied snake is dangerously venomous and, contrary to popular belief, can bite underwater. 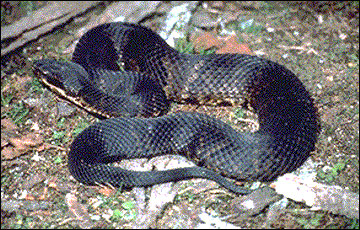